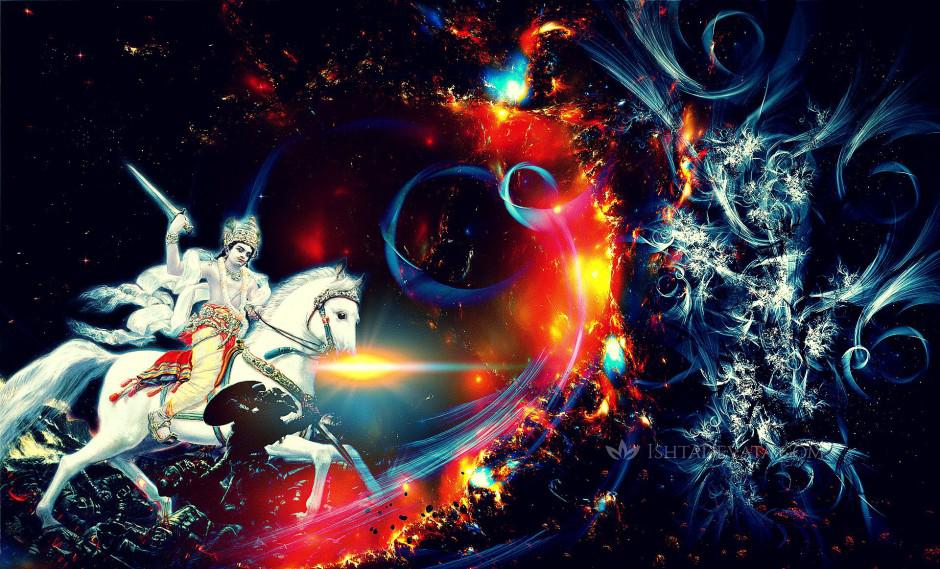 In Hinduism, the Trimurthis comprises of Brahma, Vishnu and Shiva. Brahma is known as the creator, Vishnu is the preserver and Shiva is the destroyer. In this post, we will look into how and why God Vishnu transcends from a preserver to a destroyer. In the tenth and the final avatar of Maha Vishnu, he takes the form of Kalki, the destroyer, who exists during the Kali Yuga and dedicates his life to destroying the ever growing epidemic of evil.

The ten avatars of God Vishnu signify the phases and stages of existence of man. The ten major incarnations is said to represent individual phases of mankind’s existence. Kalki, the tenth avatar of God Vishnu, is seen as the tenth and the final incarnation of the avatars of the God, and essentially signify that it is the end of the Kali Yuga, or the Iron age. The essence of this end is that there will be a new order of spirituality that will be derivative of divine revelations and scriptural truths.

Kalki is said to appear at a time when Kali Yuga will end. The age itself, Kali Yuga, is perceived as a destructive realm, in that there will be a marked decline in devotion and spirituality in the truest sense of the term. It is also believed that Kalki is god’s own response to the yearnings and needs of people on earth that still seek the truth, that still aspire for a sense of spiritual advancement, and remain faithful devotees of the God and his power. To this end, the arrival of Kalki is a symbolic announcement of the fact that revitalization of spiritual wisdom and real religious traditions and the revival of the scriptures in their authentic form will take place with his arrival.

While many people look for the avatar of Kalki, it must be understood that his avatar will not walk around and parade being Kalki – for it is how the Buddha and God Krishna themselves were. Their real stance, avatar and status as incarnates of God Vishnu was not made known to everyone.

The ten avatars of God Vishnu

The arrival of Kalki will restore a sense of spiritual devotion and a quest for spiritual growth. As it stands now, the earth has come to a place where a lot of crime takes place, where a lot of strife, trials and tribulations prevail – and that is nothing short of dangerous for the future of the world. Kalki is set to drive home the universal language of the heart, and the universal assertion of spiritual value and importance. Legend reveals that Kalki will edify the tenets of the last three avatars of God Vishnu – therefore, he will be the compassionate and detached individual that the Buddha was, he will have the love and charisma that God Krishna had, and the sense of duty, dharma and inner radiance that God Rama personified.

The birth of Kalki and his arrival on earth is described in the Kalki Purana. According to the Kalki Purana, he is the final and the greatest avatar of God Vishnu. According to the Bhagavata Purana: “At the end of Kali Yuga, when there exist no topics on the subject of God, even at the residences of so-called saints and respectable gentlemen, and when the power of government is transferred to the hands of ministers elected from the evil men, and when nothing is known of the techniques of sacrifice, even by word, at that time the God will appear as the supreme chastiser. Kalki, the God of the universe, will mount his swift white horse Devadatta and, sword in hand, travel over the earth exhibiting his eight mystic opulence and eight special qualities of Godhead. Displaying his unequaled effulgence and riding with great speed, He will kill by the millions, those thieves who have dared dress as kings.”

To know more about the legend of  Maha Vishnu’s final avatar, check out the video below.

Vamana Avatar And The Significance Of Interchanged Weapons Of God Vishnu

Parashurama – The Ever Living Vishnu

1 Comments on “The Legend Of Kalki: Maha Vishnu’s Tenth Avatar”