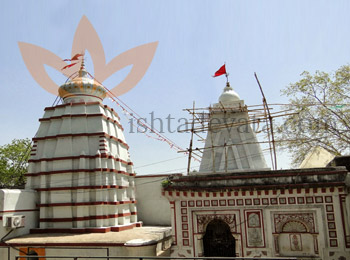 The Bakreshwar Shakthi Peeth is located near Suri Town, Birbhum District and Durbajpur, West Bengal on the banks of the River Papahara. The temple is about six miles to the north west of Durbajpur Railway Station.

Mahishmardini is shown as a ten-handed mother who is seated on a ferocious lion. She is slaying Mahishasur –the buffalo demon. In honour of this form of Devi Durga, a hymn called the ‘Mahishasur Mardini Stotram’ is sung everyday at the temple after the Prabhat and Sandhy Aratis

According to one puranic reference, during the marriage ceremony of Lord Narayana and Lakshmi, two sages, Lomas and Subrita were invited for the marriage. But when they came the host received Rishi Lomas first. Rishi Subrita was enraged at this and he developed eight cripples in his body. Thus he got the name Ashtabakra (eight curves) Muni. Rishi Subrita wandered on earth and reached Kashi to meditate upon Lord Shiva. However, when the Muni reached Kashi, he was directed by a divine voice to proceed towards Gupta Kashi, which is in the east. Rishi Subrita, thus came to Bakreshwar and meditated for 1000 years. Lord Shiva pleased with the penance appeared before Rishi Subrita and asked him to build a temple which was later built by Vishwakarma.

At this temple, Navaratri is celebrated with great fervour. Special pujas and Yagnas are held during Navaratri. Durga Puja and Maha Shivaratri is also celebrated with grandeur. Poush Mela is held in the month of December- January, besides other fairs such as Shivratri fair, Dharmraj puja fair (on Buddh purnima), Makar Sankranti fair and Kali puja fair.

The Netaji Subhas Chandrabose International Airport is the biggest international airport of the state. It is situated at Dum Dum, Kolkata. One more major airport is Bagdogra airport close to Siliguri. This was initially set up to cater to the needs of the domestic travelers. However, it currently offers overseas flights to Thailand and Bhutan as well. One more international airport has been proposed and it is being built up by the West Bengal Industrial Development Corporation, Bengal Aerotropolis Projects Ltd., as well as other enterprise collaborators. In the scheme, the Changi Airports of Singapore, Citystar Infrastructure, IL&FS, Pragati 47, Lend Lease Company, and Pragati Social Infrastructure & Development Ltd. are also involved. It is under construction in the city of Durgapur, Burdwan district. It is expected that this airport will act in the form of an international airport as well and the name of this airport is going to be Kazi Nazrul Islam International Airport.