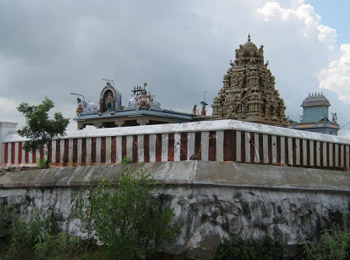 Sri Sivasubramanian Swamy Temple is dedicated to Hindu God Murugan located at Perumbairkandigai Village in Kanchipuram District. This holy place is said to be on par with the six abodes of Lord Muruga (Arupadai Veedu - Thiruchendur, Palani, Thiruthani, Swamimalai, Pazhamudircholai and Thiruparankundram).

The name of the village itself is very unique, Perum + Peru + Kandigai, meaning that one should be very fortunate in order to take birth in this village. This village is situated approximately 5 Kms from Achirappakkam (a small town in Chennai – Tiruchy national Highway). It is said that during ancient times, there were nearly 33 temples in this village. As days passed on, most of them got damaged due to various reasons and only a few among them were left.

It is said that after the Soora Samharam at Thiruchendur, Lord Murugar came and rested here in this twin hill of Sanjeevi and Mahameru. The temple is located on top of the Sanjeevi hill, also called Siddhar Hill and it is considered that Siddhars worship Lord Muruga here even now. In this sacred hill, long ago, Lord Muruga gave south faced Dharshan (Therku Muga Dharisanam) to Sage Agasthiyar. The nearby Mahameru hill is also a beautiful one.

There are about 100 steps to the hillock temple and also a motorway right to the top of the hillock. The base of hill is having huge banyan trees, Ellaiyamman temple and a beautiful temple tank. Near the temple tank at the base, there is a Vinayagar temple The Vinayagar here is called ‘Parai Vinayagar’ and he seems to have appeared naturally there. While climbing, there is one Sannathi containing Navagraha devas. The temple tank is called Sanjeevi Theertham and it is said to cure many diseases.

Subramanyar is seen with 6 faces and 12 hands along with his consorts Valli and Deivanai. In front of him is the ‘Chathru Samhara Yanthram’. Both the temple and the Yanthras are said to be very ancient. Yanthra pooja and Chathru Samhara homams are being done here.

Sri Arunagiri Nadhar, Sri Pamban Swamigal and 19 other sages had sung about the deity over this hill.

Brahmotsavam is being celebrated on Vaikasi Visagam day. After the completion of the 10th day of Tamil Chithirai month’s festival at the Achirupakkam temple, Aatcheeswarar and Ilangili amman will circumambulate this hill on the 11th day. During that time, Lord Murugan with his consorts will come down to the junction of this twin hill to welcome his parents and then take them to the Agasthiar Stage at the Thaanthondreeswarar temple. On the Chithra Pournami, an auspicious full Moon day, the festival of Lord Shiva giving the darshan of his marriage to Agasthia Maharishi is celebrated in a grand manner. Yathra puja and Chathru Samhara Homas are also celebrated joyously.

Chennai Airport is located at a distance of 84 Kms from Perumbairkandigai.

Perumbairkandigai is located in the Chennai – Trichy National Highway, after Achirappakkam, at an about 5 kms you have to turn left and go for about 2 kms.