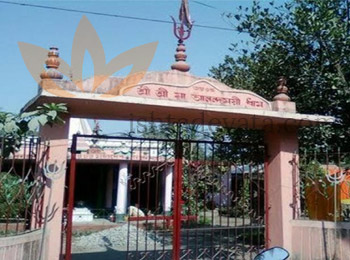 The Ratnavali Shakti Peeth is situated on the banks of Ratnakar River at Khanakul-Krishnanagar, district Hooghly, West Bengal, India. It is locally known as Anandamayee Sakthi Peetha. The Holy temple of Anandamaye temple is dedicated to a divine power “Goddess Durga”, who is worshipped by a large number of Hindu devotees. It is believed that Devi Sati's 'Right Shoulder' fell here.

The temple is dedicated to Goddesh Durga. It is among the 51 Shakti Peeth of Ma Sati. It is said that, the Right shoulder of Maa Sati fell here, when lord Vishnu in order to relieve lord Shiva from grief of losing his wife Sati, used his ‘Sudarshan Chakra’ to incise maa Sati Body. Then, at the place of fall of Right Shoulder, this temple was constructed. Ratnavali Shakti Peeth is situated in Khanakul-Krishnanagar (on the banks of Ratnakar River); district Hooghly, West Bengal, India. Here the idol of Maa Sati is called as ‘Kumari’ and the lord Shiva is worshipped as ‘Bhairav’. Just near to the temple, flows the flamboyant Hooghly River, and a walk in the evening on the banks of this river is worth to go for.

The idol of Maa Sati is called as ‘Kumari’ and the lord Shiva is worshipped as ‘Bhairav’. Meaning of Bhairav is without fear or terror.

According to the history, Daksha who is the father of Goddess Sati insulted the lord Shiva and Shri Sati. He did not invite them to Daksha Yoga. Goddess Sati did not get the permission from lord Shiva and went to the Daksha Yoga. Her father insulted a lot. so goddess Sati sacrificed herself in the Yogna. On hearing this, lord Shiva got angry and he started to dance for destroyed this universe. To prevent this, lord Vishnu Sliced the body with his Chakra. In this place only shakthi's Right Shoulder fell down and worshiped as Kumari.

AccordingDurga puja is much celebrated festival around this region and idols of Maa Durga are put in to the sea, after the festival is over. During Durga puja people also indulge themselves to dance that is dedicated to Maa Durga. Navaratri that falls two times in a year- one in the month of March or April and other in the September or October month depending on the Hindu calendar, is the major festival here. Navaratri are celebrated for over 9 days, with some people not eating any type of food that is derived from the soil for these nine days. Special ceremonies and rituals are carried during these days. Another festival that is celebrated with great enthusiasm is the ‘Shivaratri’.

People prays to the Goddess for their wishes to be fulfill and to gain prosperity.

The Nearest Airport is Netaji Subhas ChandraBose International Airport, Dumdum, Kolkata. Pilgrims can opt for the regular trains that pass through the nearest station - Arambagh. From there they will have to hire an auto rickshaw to reach the temple. There are many public and private vehicles available to reach Ratnavali Shakti Pith Temple West Bengal. The nearest bus terminal is Arambagh bus stand.