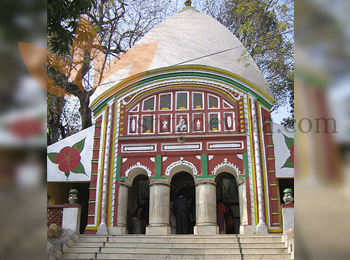 The Nalateshwari Temple is situated in the Nalhati town of Birbhum district, is a nearby temple attraction to Tarapith. The town Nalhati is named after Nalateshwari temple, one of the 51 Sakti Peethas. It is only 16 km from Rampurhat. The town is sanctified by the river Brahmani and Maa Nalateshwari, the Holy Goddess. This temple is believed to be erected at a spot where the ‘Nala’, (Vocal chord with part of the tracheae), the throat of Goddess Sati (Sakti) had fallen .it is also believed that Debi’s ‘lalat’ (forehead) had fallen there. So she is called as ‘Nalateshwari’ .The temple is dedicated to the Kali form of Goddess Devi. It is located on a small and beautiful hillock.

According to the localities, in 252th Bengali year or “Bongapto”, “Kamdev” (the Hindu god of love and desire) who had dreamt about its existence discovered the larynx of maa sati at this Nalahati forest. Rani Bhabani had built a small temple over the Peetha of Sri Parbati Mata, later on or about the 1890s Maharaja Ranajit Singha of Nashipur built the temple and Dharamshala as we see it today. The main temple of the town is that of Maa Nalateshwari’s temple. She is believed to be present in a big mounted rock, dipped with vermillion, She is adorned with a gold crown and three golden eyes. She has a beautiful silver arch on her crown with the images of Maa Durga, Maa kali and lord Shiva. Like all Sakti Peethas, this Mandir has an adjoining Shiva Mandir within the compound.Here the Shiva is known as Yogesh Bhairav and Sakti is Kalika Devi. There is a huge sacred tree where the devotees bind red and yellow threads to fulfill their wishes. Beside the main temple, Lord Ganesha is seated in another temple.. The temple walls are designed with beautiful panels of terracotta.

This is a beautiful place with fine vicinity and plateaus all around it where Maa Nalateswri resides and has resemblance with Kamakha and Kalighat pithas. The goddess of this place is known as Maa Nalateswri who is also praised as Maa or “Bhagobidhata-Nalateswri” or Devi Parvati or Kalika. The “Garb Griha” (sanctum sanctorum) of this temple is crowned with a raised pinnacle where deity of Maa Nalateswri is worshipped. The feeling of positive energy (that helps to destroy the evils of life) rises within as you look at the deity of Maa. With large “Trinayan” and golden red tongue of the deity below this lays the “Nala” or throat of the divine sati.

According to the history, Daksha who is the father of Goddess Sati insulted the lord Shiva and Shri Sati. He did not invite them to Daksha Yoga. Goddess Sati did not get the permission from lord Shiva and went to the Daksha Yoga. Her father insulted a lot. so goddess Sati sacrificed herself in the Yogna. On hearing this, lord Shiva got angry and he started to dance for destroyed this universe. To prevent this, lord Vishnu Sliced the body with his Chakra. It was placed in 52 different parts of the world. That is known as 52 Shakti peethas. In this temple goddess sati’s throat part was placed, which was called as ‘Nalhati’ (Nala – throat).

Pujas start from opening of the “Garb Griha” (sanctum of sanctorum) at 5:30 am and end at 8:30 pm but the timings do change with the seasons.

Special rituals are held here during the kali Puja and on Amavasya (new moon) with yagna and also on every Tuesday of the ‘Jaishtya’ (mid may- mid June) month of the Bengali calendar. On every Saturday, ‘aarati’ is done with 108 ‘pradeeps’ (lamp) of pure ghee.

On a daily basis, Maa is offered with fruits, sweets and ‘Chhana’ in the morning ,Later she is offered with ‘anna-bhog’(rice ), sabjis , 5 types of fries, fish and ‘payesh’ on the noon and finally ‘halua’, luchi and sweets in the night.

Navaratri that falls two times in a year- one in the month of March or April and other in the September or October month depending on the Hindu calendar, is the major festival here. The whole ambience of temple during this festival is mesmerizing to see and people all over the country come here to celebrate this auspicious occasion. Navaratri are celebrated with full energy, faith, dedication and devotion. Navaratri are celebrated for over 9 days, with some people not eating any type of food that is derived from the soil for these nine days. Special ceremonies and rituals are carried during these days. Another festival that is celebrated with great enthusiasm is the ‘Shivaratri’.

People pray to the goddess to fulfil their wishes and remove domestic issues.

Shri Ganesh temple, Shiva temple and Ana Baba Mazar Sharif are some of the star attraction near to Nalhati temple.

The nearest airport is DumDum, Kolkata. If one wants to reach through Railway route, one have to stop at Nalhati Jn and the walking distance is hardly 10 minutes. There are many direct buses starting from various places in Birbhum. The nearest bus terminal is Nalhati Bus stand.