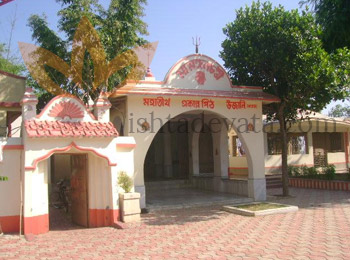 The Mangal Chandi Temple, Ujani Shakti Peetha, is situated in Ujjani in Guskara, Barddhaman, West Bengal. Here, at Ujani Shaki Peeth, the right wrist of Devi Sati had fallen. She is in the form of Devi Mangala Chandika or Mangal Chandi and Kapilambar appears as Vairabh. From then onwards, the place became pious and was deified to be a Shakti Peeth of Bengal.

The freshly painted yellow colored simple edifice of the Ujani Shakti Peeth doesn't depict any special architectural ornamentation. The temple courtyard is enriched with beautiful trees that have grown there and preserved for ages. Inside the garbha griha two idols of the deities are consecrated. One is of Devi Mangal Chandi and the other is of Lord Shiva, worshipped as Kapilambar here.

The proud King Dakshya summoned a yajna but intentionally avoids inviting his daughter Sati and her husband Lord Shiva as Dakshya was not that fond of his son-in-law. When Sati reached the yajna ceremony uninvited, the abominable king insulted her and Lord Shiva like anything. Out of rage and pain, the devi then and there self-immolated herself leaving behind the corpse. When Lord Shiva came across this fact, He immediately took the form of Birbhadra and chopped off the head of Dakshya and took the corpse of the Devi and started mourning. To help Him out of His pain and to save the world, Lord Vishu sent the Sudarshan Chakra to mutilate the body of the Devi. When that happened the body was cut off in 51 pieces. The right wrist of the Devi fell at this place and formed the Shakti Peeth.

One can get in via Indore – Devi Ahilyabai Holkar Airport (IDR) at Indore is the nearest airport to Ujjain, 55 km away. Indore is connected to major cities in India by air. It has direct air connectivity with New Delhi, Mumbai, Bhopal, Pune, Hyderabad, Nagpur, Raipur and Ahmedabad. Taxi services are available to reach Ujjain from Indore airport. Another option is to get in via Bhopal – Raja Bhoj Airport (BHO) at Bhopal is 172 km away from Ujjain. Bhopal has daily flights to and from New Delhi and Mumbai.

Another option is by train. Ujjain railway station is a major junction of Western railway zone. It has many long distance and direct trains to almost all parts of India. You can board direct trains to Delhi, Mumbai, Kolkata, Chennai, Jammu, Jodhpur, Jaipur Udaipur, Varanasi, Gorakhpur, Ratlam, Rajkot, Ahmedabad, Baroda, Pune, Gwalior, Bilaspur, Patna, Nagpur, Cochin, Hyderabad, Bangalore, Dehradun etc. During the period of Simhasth Kumbh Mahaparv, trains coming to Ujjain will be halted at flag stations that are of little distance of 10-12 kilometers. Railway will provide buses to reach Ujjain and Mela area. Necessary arrangements will be made for the comfort of passengers at the flag stations.

Ujjain is well connected by road. Regular bus services are available from Indore (55 km), Gwalior (450 km), Ahmedabad (400 km) and Bhopal (183 km) to Ujjain. Air-conditioned buses are also available in these routes. Ujjain has two bus stands; one is near railway station for Agar, Kota and Nagda routes and at Nanakheda area to Indore and Maxi routes. You can book bus tickets from online travel portals and online and off-line travel agents