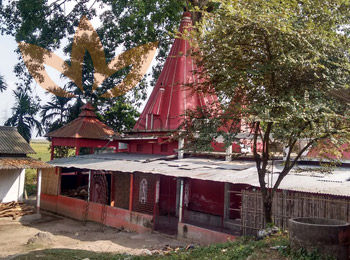 The Bhramari Devi Temple is located by the banks of the Tista River. It is one of the reasons why it is also known as Tristrota Shakti Peeth. West Bengal is in the eastern part of India and is one of the country’s medium-sized, states. The Dooars in the foothills are rich in forest. The unconquerable river Ganga flows across the state’s rich alluvial plains to reach the Bay of Bengal in the south, through vast swamps that are known as the Sundarbans.

The Bhramri Devi Mandir is one of the 51 Shaktipeethas belonging to Devi Sati/ Durga where the left leg of Devi Sati fell at Trisotra, Salbari village, Bodaganj, Jalpaiguri, West Bengal. It is a famous Shakti Peethas in West Bengal. The temple is a one storied, red colored structure enshrining the idol of Devi Bhramri and Lord Ishwara.

The main deity is Shri Bhramari Shakti Peetha Devi / Shakti in Kali form. Here the Devi is accompanied by Her Bhairava known as Lord Ishwara.Devi Bhramri is also one of the manifestations of Devi Adi Shakti- the Goddess of Power and Strength.

According the Purana, once Arun Asura conquered the Heavens (swarglok) and evacuated all Gods from their lavish abode. The repulsive Asura tried to conquer on the wives of the Gods too. Then the Goddess prayed to Goddess Parmeshwari who then transformed Herself into a large bee and along with a swarm of bees attacked the demon. The bees torn up the chest of the Asura and killed him. From then onwards the divine mother is also known as 'Bhramari Devi or Bumblebee'- as a savior and protector of mankind. The exact date of the temple's creation is still unknown as this is a Shakti Peeth that had been formed centuries back. It is believed that the Vama Pada or the left leg of Sati or Shakti fell at this place to form the Mata Bhramri Devi Temple.

One can reach West Bengal by air. It is convenient as well as easy. Nearly all the public and private airlines operate regular flights to the state, from the key cities of India. West Bengal has its international airport - Netaji Subhas Chandra Bose International Airport - at Kolkata, the state capital, apart from a domestic airport at Bagdogra, near Siliguri.

A well planned and extensive road network covers the entire state of West Bengal. A number of National Highways and State Highways cross through the state. One can easily approach the state from neighboring states, like Bihar, Orissa and Jharkhand, via road. Cross border roadways are also fully functional, with neighboring countries like Nepal, Bhutan and Bangladesh.