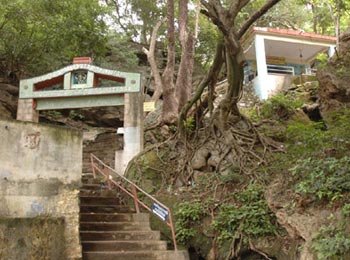 Suruli Velappar Temple is located at Surulimalai in Theni district of Tamil Nadu. This temple is 1000-2000 years old. Lords Shiva and Vishnu, Vinayaka are in the sanctum sanctorum along with Lord Velappar-Muruga. The place is historically famous as Neduvel Kundram-Hill of Lord Muruga. According to faith, the hill is the home of all Gods, hence there are idols for all Gods. 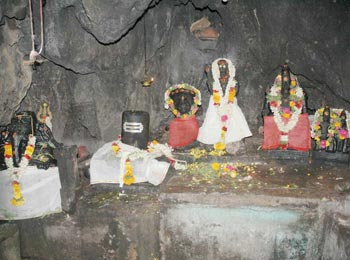 This is a cave temple. The cave has many wonderful features as a tree, its stems and leaves changing into rock after 48 days in deep water, the wet sand changing into sacred ash etc. As huge number of Rishis and Devas reached Himalayas to attend the divine wedding of Lord Shiva with Mother Parvathi, north level rose up and the south went deeply down. Lord Shiva sent Sage Agasthya to south to balance the earth level. As the sage was unable to have the wedding darshan, Lord granted this darshan to the sage in this cave. Hence this cave is praised as Kailash Guhai – cave.

The Devas, subjects of the celestial world, Sages, Siddhas and others, in their effort to defeat Ravana and release themselves from their bonded life under him, held a meeting in the Kailasa Nathar cave headed by Lord Maha Vishnu. When Ravana came there with his huge army, Lord Maha Vishnu stood before him in Boodha Swarupa covering earth and heaven and blocked his march. Ravana trembled and retreated to save himself from the fury of Lord. Lord Suruli Velappar graces his devotees from a cave above this spot.

Chithirai utsav in April-May; Aadi 18 celebrations in July-August; New Moon days in Aadi and Thai month (July-August and January-February respectively) Thai Poosam in January-February; Vaikunda Ekadasi in December-January; Shivrathri in February-March and Panguni Uthiram in March-April are the festivals celebrated in the temple.

For freedom from sins committed, devotees carry milk pots, perform special abishek to Lord, tonsure and bathe in Surabi River gaining benefits of a peaceful life. All physical problems and diseases will disappear. The river has rich herbal properties.

The nearest airport is Madurai Airport. The nearest railway station is Theni Railway Station. Cumbam is 51 km from Theni.