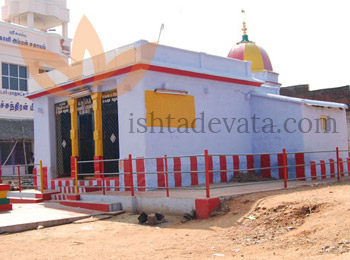 Special pujas are conducted in the temple on New Moon and Full Moon days with Homas at night. The deity is dressed very beautifully after the pujas as one of the noted Ambicas. For example, the dressings will be like that of Samayapuram Mariamman or Madurai Meenakshi. She will look as Sri Andal in Margazhi (December-January) and with crystal white dress as Mother Saraswathi on the Saraswathi Puja day. People start the education (Aksharapyasa) of their infants on this day writing on their tongue with lotus buds. The Alankaras and pujas would be in tune with the deity in various places and this will continue till the next full moon days. Nivedhanas also change accordingly.

Lord Shiva graces in this temple as Ashtothara Linga, i.e. sculpting 108 lingas in a big linga. Nandhi, the bull vehicle of Lord Shiva is below the Avudayar – the seat on which Linga is installed. Those facing obstacle in marriage offer turmeric garlands to Lord and Ambica. According to astrology, the seventh and eighth place in the horoscopes of men and women respectively determine their happy marital life. Accordingly, men go round the tree here seven times clockwise and anticlockwise and women eight times.

The temple is situated on the western bank of Mullai River. Mother Ambica is holding the trident, snake and Udukkai and kumkum. A three day festival is followed from the Tuesday during Navarathri. On these days, devotees carry fire pots and milk pots as their prayer commitment to the Goddess. Sweet porridge is offered as Nivedhana to the Goddess on Tuesdays, Fridays, New Moon and Full Moon days. There is a Linga called Pathala Vaideeswarar Lingam in a pit made of herbals. Those suffering from prolonged illness pray to the Lord here. Sri Kamakshi Amman is in a separate shrine with palm roof. On Shivarathri day, a pudding (pongal) is made with bamboo rice and sugarcane juice as nivedhana.

There are shrines for Vinayaka, Gowmari and Bhagavati Amman

Mother Nagakaliamman blesses the devotees a happy marital life from Her Abode in Muthuthevanpatti. She is dressed grandly as followed in the renowned temples of the state which is kept during a whole month. There was an ant-hill in this place where Sangu flower plants were in plenty. Goddess appeared in the dream of a Shiva devotee and told him that She was in the ant-hill. People found the Swayambu of the Goddess. An idol was made and was installed on the ant-hill and named Swayambu Nagakaliamman.

Mahashivrathri in February-March and Navarathri in September-October are the festivals grandly celebrated in the temple.

Those facing obstacles in marriage and suffering from prolonged illness pray in this temple.

The nearest railway station is at Theni Railway Station.

The temple is near the bus stand at Muthuthevanpatti, which is 4 km from Theni.