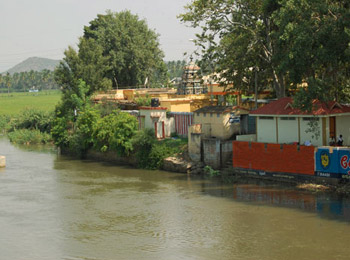 Sri Kanneeswaram Udayar temple is located in Virapandi, a town in the Theni district of Tamil Nadu. The temple is dedicated to Lord Shiva whose graces here as Lord Kanneswaram Udayar and his consort Goddess Gowmari Amman. The deity here is known to resolve eye related ailments and bless vision for the visually impaired.

Gowmari amman is praised as “Aram Valartha Nayaki” which literally mean the one who cultivates truth or dharma. The Goddess is considered most benevolent and merciful. The place is named after the King Veerapandi. The temple is located on the banks of River Mullai. Devotees, who visit this temple, take a holy dip in this river as its water possesses high medicinal properties due to the presence of herbs from the nearby Western Ghats.

Pandya king Veerapandian is said to have lost his vision as a result of his sins committed in his previous birth. (Poorva janma karma). The aggrieved king is said to have fallen at the feet of the Lord, praying him to resolve his eye impairment. The Lord advised the king to pray Goddess Gowmari Amman who graces next to the river Mullai. The king on worshipping the Goddess is believed to have got vision in one eye. The goddess then recommended the king to pray the Shiva Linga which she was worshipping, to get vision in the other eye. The obedient king did as instructed and thus regained vision in both eyes.

The Lord is believed to have told the king to build a temple for him and the Goddess which the king devotedly obeyed. Thus Kanneeswaram Udayar temple came into being.

During the celebration of Chithirai festival in April-May in the, Gowmari Amman Temple, the puja for the Flag Post (Kodi Maram) is conducted in this temple. Special pujas are performed in the temple every year in Tamil New Year day and other auspicious days.

The temple is 80 km from Madurai on the Kumuli road on the banks of River Mullai.

The nearest railway station is Theni.

The nearest airport is Madurai.