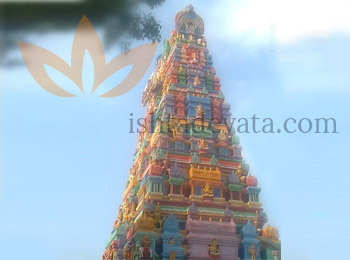 The antiquity of the temple is as ancient as that of Madurai Meenakshi temple. Many Siddhas lived here. Those seeking mental peace choose this temple for meditation and yoga practices. One of the Siddhas in the guise of beggars here was Sivanandi Siddha. He did many miracles here. His tomb (Jeeva Samadhi) is here on which stands the holy tree the Vilwa.

People of this place believe that the sacred ash offered under the tree is a powerful remedy for prolonged diseases. Special pujas are performed to the Silver Vel in the temple to protect the people from famine and starvation. It is the faith of the devotees that participating in this worship would protect them from poverty. Many around this place have their marriages solemnized in this temple in the faith that their marital life would ever be happy.

Lord Brahmma and Lord Vishnu grace from the Lingodhbava shrine behind the sanctum sanctorum would be blessed with collective benefits of worshipping the three Lords together. Such a form could be seen in Tiruvadhigai Veeratteswarar temple.

Those seeking child boon pray to Santhana Vinayaka in the temple. Those trapped in litigations, light lamps for favourable results. Those suffering from indigestion or other stomach problems offer pure rice to the Lord and take it as food.

Andipatti is 15 km from Theni on the Madurai route. The temple is near the shandy.