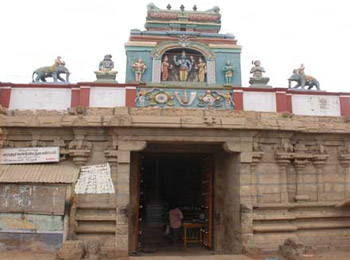 This is a very beautiful sculpture, representing the Pandya period architecture. Sri Vinayaka is depicted in one pillar and others in other pillars. Mother Perianayaki and Sri Anjaneya grace from separate shrines south of Sri Varadarajaperumal. There are shrines for Navagrahas (9 planets), Senai Mudalvar, Tumbikkai Alwar, Udayavar – Sri Ramanuja, Nammalwar, Nagaraja, Dwarapalakas in the corridor – prakara. Perumal graces in a standing form.

The Vimana (tower) above the sanctum sanctorum is called Ananda Vimanam. Lord Vinayaka graces in the temple with the name Selva Siddhi Vinayaka. Venpongal (spicy rice pudding prepared with cashews, ginger, ghee etc.) is offered as nivedhana to the Lord. Agriculture yields are high if the farmers sow paddy and other seeds donated in the temple, according to old men of the place.

When monsoon failed resulting in famine in the north, people there migrated to Periakulam and settled on the banks of Varaha River. They prayed to the Lord to protect them from famine in future. They installed the Lord under a banyan tree and worshipped Him. Later, kings built the temple for Perumal with Sridevi and Bhoodevi and a shrine especially for Mother-Goddess Periyanayaki, continuing the pujas, according to hearsay stories.

Two pujas are performed each day in the temple. Chitra Poornima in April-May, Vaikunda Ekadasi in December-January, Sri Krishna Jayanthi, Purattasi Utsav and Navarathri in September-October, Tirukarthikai in November-December, Hanuman Jayanthi, Thai Poosa Pavitra Utsav and Kanu Pongal in January-February are the festivals celebrated in the temple.

All needs (righteous) of the devotee are granted by the Lord such as wedding, child, family prosperity and success in all endeavours, women blessed with long Mangal Sutra grace, freedom from fear and longevity.

Devotees perform special abisheks to the Lord to realize their aims. Special archanas are performed to Sri Anjaneya for 48 days with white flower garlands, offering butter and a garland of Vadas (a popular dish of Tamilnadu). Women perform kumkum archana to Mother for long Mangal sutra benefits.

There is a light post in front of the sanctum sanctorum. New born children are placed near this post offering fruits as nivedhana to the Lord to bless the child with various benefits, it is said. Infant devotees are seen in more numbers in the temple.

The Nearest Airport is Madurai Airport.

Periakulam is 80 km far from Madurai, 60 km from Dindigul and 16 km from Theni. The temple is on the northern bank of the river.