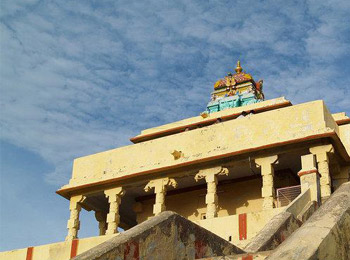 Gandamadana Parvatham is the tallest peak on Pamban Island which lies in the Palk Strait between mainland India and Sri Lanka. Gandhamadhana Parvatam is located towards the north-west of Rameshwaram and is famous for its beautiful sunrise and sunset. It is a holy place for the pilgrims, who come to worship Lord Rama’s footprints, which can be seen within the premises of the shrine. The double storied Mandapam of the Ramjharoka Temple on this hillock houses the footprints of Lord Rama on the Chakra. Gandhamadhana is located 3 kilometres from Rameswaram, almost midway between the western edge of the island and the ghost-town of Dhanushkodi at the corner of the eastern promontory.

Gandamadana Parvatham also known as Rama Foot or Ramar Patham. It is also believed that Rama stood on this point to search the whereabouts of Sita, while she was captured by Ravana. Apart from this place, pilgrims visiting the Gandamadana Parvatham can also visit Sukreeva Temple and Satchi Hanuman Temples on the way.

Mt. Gandhamadhana is believed to be the hillock from whose summit the Hindu God Hanuman commenced his flight to Ravana's Lanka. Kalidasa refers to Gandhamadhana, in the vicinity of the mythical city of Osadhiprastha in Himalaya Mountain, having Santanaka trees.

Nath tradition holds that Parashurama, after enacting his vengeance, sought out Dattatreya atop Mount Gandhamadana for spiritual guidance. Their conversations gave rise to Tripura Rahasya, a treatise on Advaita Vedanta. It was here, the deity instructed the warrior-sage on knowledge of scripture, renunciation of worldly activities, and non-duality, thus freeing Parashurama from the cycle of death and rebirth.

How To Reach Rameshwaram

Rameshwaram does not have an airport. Nearest airport is Madurai Airport.

One can easily get regular trains to Rameshwaram from other major cities of the country.

There are regular buses from other major cities of the country to Rameshwaram.