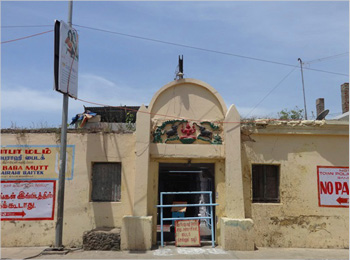 Rameshwaram, as a temple town and one of the post important pilgrim centres in India, is pretty famous for its temples and religious sites. The Five faced Hanuman Temple (or Panchmukhi Hanuman Temple) is another relatively lesser known but a unique destination for Hindu pilgrims, especially Hanuman bhakts. 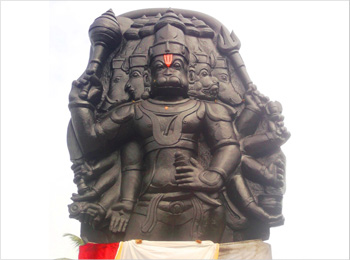 The Panchamukhi Hanuman Temple, the five-faced Hanuman Temple, is situated at a distance of 2 km from Sri Ramanathaswamy Temple. In 1964, after the cyclone in Dhanuskhodi, the idols of Lord Rama and Goddess Sita was brought to this temple and placed here. Also known as Panchamukha Anjaneya, Panchamukha Hanuman Temple is visited by almost every devotee who comes for a Rameshwaram Tour.

This temple is dedicated to Lord Hanuman. It is said that Lord had revealed his five faces here; hence the idol of Hanuman is depicted with five faces which are of Lord Hanuman in the middle along with faces of Lord Narasimha, Lord Adivaraha, Lord Garuda and Lord Hayagriva on the sides. The statue has been covered with senthooram by saints. The five faces of Hanuman also signify the five senses (panch indriyas) over which Hanuman has mastery, as he was a great yogi. They also represent the five elements (wind, water, earth, fire and sky) which are the basis of creation.

Legend goes that during the war between Lord Rama and demon Ravana who had abducted Goddess Sita, Ravana had sought the help of Mahiravana, who was the king of Patala Loka. However, Lord Hanuman, in order to protect Lord Rama and Lakshman, had built a huge fortress around them with his tail. Later Mahiravana disguised himself as Vibhishana, brother of Ravana who was helping Lord Rama in the war. He then took Lord Rama and Lord Lakshman to Patala Loka so as to kill them. Lord Hanuman while searching them also reached Patala Loka where he found out that in order to kill Mahiravana he is supposed to extinguish all the five lamps at the same time; these five lamps were burning in different directions. So to kill Mahiravana and save Lord Rama and Lord Lakshman, Lord Hanuman took the form of Panchmukhi Hanuman and put out all the lamps at the same time. The five faces of lord Hanuman are of Lord Varaha that faces the north, Lord Narasimha facing the south, Lord Garuda facing the west, Lord Hanuman facing the east along with face of Lord Hayagriva that faces the sky.

The nearest airport is at Madurai, about 174 km from Rameswaram. The airport is well connected by flights to many Indian cities like Chennai, Trichy, Bengaluru and Mumbai. Pre-paid taxi services are available from the airport. The Rameswaram railway station is the major railhead. Trains from Chennai, Madurai, Coimbatore, Trichy, Thanjavur, Palakkad and Bengaluru halt at the station. Taxi services are available from the station. Rameswaram is well connected by roads to other cities of Tamil Nadu. Tamil Nadu Road Transport Corporation buses ply regularly from Chennai, Kanyakumari, Madurai, Trichy and other cities to Rameswaram. Andhra Pradesh State Road Transport Corporation buses also ply daily from Tirupati to Rameswaram.