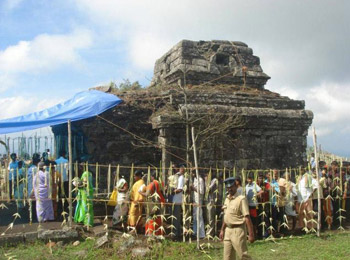 Sri Mangala Devi Kannagi temple is an ancient temple which is situated on the border of Tamil Nadu and Kerala. The temple lies about 7 km from Pazhiyankudi in Theni district of Tamil Nadu and 15 km from Thekkady in Idukki district of Kerala. The renowned king Cheran Chenguttuvan, who was the rule of the ancient Tamizhagam is said to have built this temple for Kannagi, around 2000 years ago. This temple was erected at a place called Vannathiparai and called it 'Kannagi Kottam' or 'Mangaladevi Kannagi temple'. The shrine is situated at an elevation of about 1,337 m above the average sea level and is surrounded by lush greenery. The temple is closed throughout the year except during the Chitra Pournami festival. Special permission from forest rangers has to be acquired for visiting the temple at other times. The temple offers fantastic view of the Western Ghats range and few villages surrounding it.

Goddess Kannagi in this temple appears gracing her devotees in a standing position. During ancient times, hunters who inhabited the place, worshipped Kannagi Devi as their community deity and celebrated a festival on the full moon day of the Chitra month. (Chitra poornima which falls in April-May). This tradition is followed even today.

On the auspicious occasion of Chitra Poornima, poojas are performed five times to the deity. Water (Surabi theertham) is fetched from the nearby Suruli falls for the abhisheka of the deity. Since Devi Kannaki is said to have reached this place in a furious mood, people apply sandalwood paste on the deity as a dressing (alankara) and offer curd rice as nivedhana, to cool her ugra( anger). They also offer her a mixture called Akshaya made of flakes, ghee, milk, sugar candy, banana fruits, dates, grapes, sugar and cardamom.

Keralites worship Kannaki as Goddess Bhagawati. The Chera king is said to have built temple as huge as a castle (Kottam) with strong and tall walls around it. Hence the temple got to be known as the Kannaki kottam. A number of inscriptions are found in the temple.

The temple is closely related to the ancient story of Silapathikaram, forming part of the five Tamil epics – Silapathikaram, Manimekalai, Jeevaka Chintamani, Valayapathi and Kundalkesi.

Kovalan is said to have come to Madurai along with his wife Kannaki with the intention of getting settled their. He wanted money to start a business and hence decided to sell of Kanagi’s anklets. But he was falsely implicated for robbing the anklet belonging to the Queen Kopperundevi of Madurai. King Nedunchezhian is said to have believed the prosecution and executed Kovalan for the crime, which he never committed. In hearing this Kannagi appeared before the king’s court and proved that her husband Kovalan was indeed innocent and was wrongly punished. Realizing his grave mistake, King Nedunchezhiyan fell dead followed by his queen.

Kannagi who was furious at the injustice met out to her husband, is said to have cursed, burning down the city of Madurai. She is believed to have walked for 14 days and nights continuously towards the south, until reaching this hilly region, where Kovalan is said to have taken Kannagi with him on the Pushpaka Vimanam.

Witnessing these miracles, the hunters inhabiting the place, worshipped Kannaki as Goddess Mangaladevi. They had also narrated this story to the Chera King Senguttuvan when he visited the place. The noble king is believed to have built this temple in order to honour the chastity of Kannagi. The king is said to have selected a stone from the holy Himalayas and bathed it in sacred river Ganga before sculpting the idol of Kannagi from it. This stone sculpture of Kannagi was installed in this temple.

Chitra Poornima is the only festival celebrated generally in the month of April-May.

Pilgrims must reach Kumuli which is 140 kms from Madurai and from there take a jeep to Gudalur, which is 16 kms from Kumuli. There is a mountain route for the temple over which four wheels drives goes only on Chitra Poornima day. Other vehicles cannot be used in this hill route. On others days, visitors have to trek the hilly terrain for about 7 kms, which usually takes about 4 hours.

The nearest railway station is located at Theni.