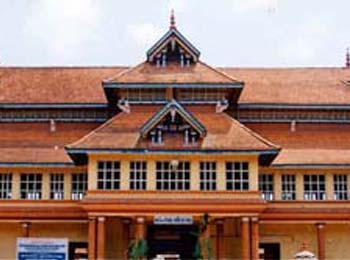 The Chengannur Mahadeva temple is situated at Chenganur, in the Alappuzha district of Kerala, India. This temple is also known as the Bhagavathy Temple. The temple is primarily dedicated to Lord Shiva.

Chengannur Mahadeva temple has a temple tower built in the typical Kerala style. There is also a gold plated dwayastamba (flagstaff) which is axial to the central shrine. The outer precinct of the temple houses the shrines of deities such as Sastha and Neela Greevan, while a statue of Lord Ganapathy is found in the inner precinct. The Vigraha (idol) of Goddess Bhagavathy is made up of panchaloha, an alloy of five metals. The idol of the Devi is believed to have been installed by Perumachuten.

The temple follows the typical Kerala styled temple architecture, like most other temples pertaining to the state of Kerala, India. The temple has a two storeyed Raja Gopuram (entrance tower) with the upper storey having wooden trails covering the Kottupura (a hall of drum beating during festivals). The temple is surrounded by a rectangular wall called the Kshetra-Madilluka, within which the individual shrine of various deities present in this temple are enclosed. The metal plated Dwajasthambam is located axial to the temple tower leading to the central sanctum. There is also a Deepastamba for the devotees to the light lamps. The outer pavilion or corridor is called the Chuttambalam. The main sanctum lies within a rectangular hall called the Nallambalam. A raised square platform called Namaskara Mandapa is seen in-between the entrance of the Nallambalam and the main sanctum. This Namaskara Mandapa has a pyramid shaped roof.

Thevrapura is the temple's kitchen where the various offerings to the deity are cooked. This lies to the left of Namaskara Mandapa from the entrance. The temple also has a Balithara, an altar for making ritualistic offering to demi-gods and the festive deities. The shrine of Lord Vishnu is called the Sreekovil which houses the statue of the deity here. The Sreekovil is built on an elevated platform with a single door which can be reached by climbing about five steps. One can find the statues of the guardian deities called the Dvarapalakas on its entrance. The main priest called the Thantri and the second priest called Melshanthi are the only people allowed to enter the Sree Kovil. The Sree kovil has a circular design with its base built of granite and the superstructures built with laterite. The lower half of Sree Kovil consists of the basement, the pillar or the wall, called stambha or bhithi and the entablature called prasthara in the ratio 1:2:1, in height. Its upper half is divided into the neck called griva, the roof tower called shikhara and the fonial kalasam (made of copper) in the same ratio. The roof protects the inner structures from heavy rains, especially during the monsoon. The temple's roof and a few pillars are carved in wood and stuccuto, depicting various events from the great epics Ramayana and Mahabharatha.

The primary deities of the temple are Lord Shiva and Mother Parvati who are found in two separate shrines. The shrine of Lord Shiva faces the east while the Devi's ambalam faces the direction West. The main specialty of the Shiva linga here is that, it is believed to have emerged on its own (Swayambu). The linga also has a gold plated image of Ardhanaareeswara (Shiva and Sakthi together).

According to Keralite legends, Goddess Bhagavathy is the deity of the land and is regarded as the ultimate protector. Devi Parvathi is believed to have visited this place after getting married to Lord Shiva at the Himalayas. Devi Parvathi is said to have got her menstrual period for 28 days and thus is considered a reincarnation of Sati. One another version of the same legend reveals that sage Agasthya, who could not witness the sacred marriage of Shiva and Parvathi, was visited by the divine couple here after their wedding. Since Devi Parvathi was in her menstrual period, she had to wait for 28 days to grace the holy sage.

The Thriputharattu is one of the important festivals celebrated in the temple. Varshikotsavam is a twenty eight day long annual festival celebrated here in the months between December-Januaray. Thulasamkrama Neyyattu (October-November) -Ghee offering for Lord Shiva. Shivratri and Chitra Pournami

How To Reach Chengannur

The Kochi airport is the nearest airport to Chengannur.

Regular train services are available from many major cities of the country to Chengannur.

Chengannur is well connected to other major towns and cities of the country with regular buses.