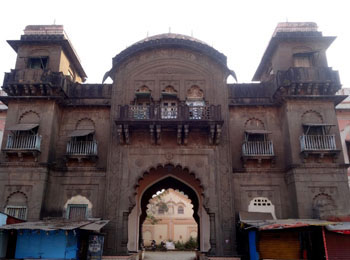 The Bhavani Mandap is situated in Kolhapur, Maharashtra. It is situated near the famous Mahalaxmi Temple.

Bhavani Mandap was an important meeting venue that housed the offices of various court officials and was centre of many celebrations. It also saw a famous murder in the central courtyard. The place has the nostalgic charm and typical architecture of the British Raj bringing back memories of the rich princely state Kolhapur used to be. At Bhavani Mandap, we can find the life size statue of Kolhapur's most loved prince Shahu Maharaj. Although, he was deemed king by the city dwellers, most of his political life was spent under the Raj. On display are stuffed animals actually hunted by Shri Shahu Maharaj including a giant bison (who has achieved some spiritual importance considering the amount of saffron spread over it), Panthers, a pair of deer and few others! It also exhibits a modest wooden throne believed to be the one used by Shivaji on his visits to Kolhapur, strengthening the idea that He was more a man on a mission with not much regards to wordly-comfort. In its present form it functions as a collective tomb of Kolhapur's Maratha royalty. Legend says that there is an underground tunnel leading to Bhavani Mandap from Panhala, the hillside fort about 20 km away from Kolhapur built to allow an escape-route for warring Maratha soldiers. Any attempts to discover this tunnel or its discovery have not been heard.

There has been a long running controversy about the Bhavani idol worshipped at Bhavani Mandap. The Kolhapur front claims it to be the real statue of Bhavani that Shivaji used to pray to and rescued from Tuljapur during a siege by Aurangzeb. The clergies from Tuljapur do not agree and maintain that their idol is genuine.

The Kolhapur Airport has no commercial airline services. The nearest civil airport is in Pune. Kolhapur Railway Station is around 5 km away from the city. Kolhapur lies on National Highway 4 which connects the city to Mumbai and Bangalore. It is served by a good number of buses plying from various nearby cities like Mumbai, Pune and Bangalore amongst others.