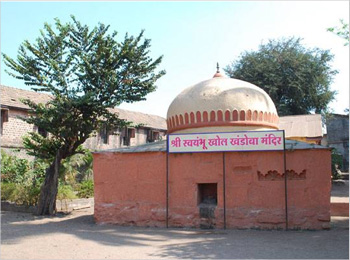 Khol Khandoba temple is located at north-west side on kolhapur city, near the Burud Galli. From the outside one sees a big dome like that of a mosque. One has to go down about 20 to 25 feet, into the temple to reach the deity. The deity in the temple is a Linga. The temple is not, however, in its original shape. It was partly demolished by an earthquake and was rebuilt later.

The main door in the temple was at the East side and upper part is in round shape as Islamic Masjid type. It is said that this temple was built in the period Mughals emperors near about 13th to 14th century. There is a 'Shivlinga' deep in the ground. The internal space was about a hundred square feet.

Beside the many myths, it is said that Shri Manajirao Jagtap of Kolhapur was profound devotee of deity Lord Khandoba, and he was visiting to Jejuri, the night of new moon every month without any conveyance, trudging and trudging for worshiping of Khandoba. As the day passed and his old age trudging to Jejuri was not possible to him. His devotion was so profound that Lord Khandoba of Jejuri actually in sighted and dreamt by to Manojirao Jagtap and showed the holy place for his existence. Lord Khandoba Shri Manojirao was drawn in supreme happiness and he suggested place for excavating and 'shivlinga' was found. After his death other devotees build a temple. Thus Shivlinga was found in a deep ground hence it is named as Khol Khandoba.

The nearest airport is Kolhapur airport aka Ujlaiwadi airport, about 10 km from Kolhapur. Kolhapur rail station (Chatrapati Shahu Maharaj) is connected by a good rail network to other cities like Mumbai, Bengaluru, Pune, Tirupati and Satara. One can take a bus, auto rickshaw or hire a cab to reach the city centre. Kolhapur can be reached easily from Mumbai, Pune and other places by road. There are also regular State and private buses that ply between Kolhapur and Mumbai/Pune. Kolhapur is 395 km from Mumbai and 225 km from Pune.