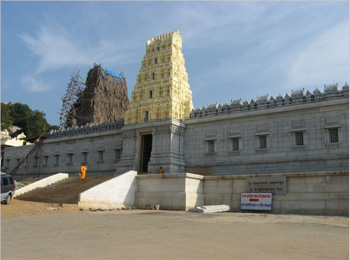 Adichunchanagiri in Nagamangala taluk of Mandya district is the holy land, engulfed with divine resonance and vibration. While the mutt is famous as 'Panchalinga Kshetra' and 'Annadani Mutt' among devotees, nature lovers find the 'Mayura Vana' of the mutt attractive. 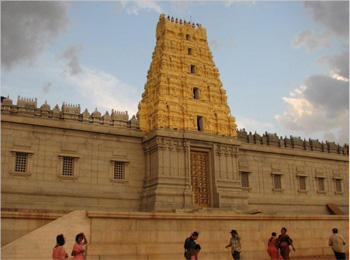 Being one of the five Lingas, the temple of Lord Someshwara is amidst huge rocks on the hill. The Linga is situated in such a dark place that devotees take lamp to have darshan of the Lord even during noon. Lord Gavi Gangadhareshwara's temple is situated atop the hill and there is a Nandi statue weighing about 10 kg near the Linga. Lakhs of people come to lift this Nandi and is called as 'Kallu Seve'. On the way to Gangadhareshwara temple, there is Malleshwara temple.'Jwala Peetha' is situated at Lord Chandramouleshwara temple. There is a cave inside the temple and folk tales tell that several sages did penance inside it.

Sri Kalabhairaveshwara, the manifestation of Lord Shiva, is the protecting deity of the Kshetra. Goddess Parvati resides here in the form of Stambambike or Kambadamma.

Folk legends say that Lord Shiva performed penance here, during which he devoured two demon brothers - Chuncha and Kancha - who were pestering people in the nearby villages for a long time. Thereafter, the place came to be known as Adichunchanagiri and Chunchanakote.

At the end of his austerity, Lord Shiva entrusted a Siddhayogi, establishing a Natha tradition. Lord Shiva also assured him that he would reside at Adichunchanagiri in the form of Panchalingas - Lord Gangadhareshwara, Chandramouleshwara, Malleshwara, Siddeshwara andSomeshwara - of which Lord Gangadhareshwara is known as the presiding deity and Chandramouleshwara is known as 'Atmartha Devatha'. The place thus, came to be known as 'Panchalinga Kshetra'.

There is ample folk literature available about the place. Inscriptions say that Ballalaraya of Halebid, Salva Narasimharaja Wodeyar, rulers of Cholas, Hoysalas, Ballalas and Vijayanagar dynasties were devotees of Lord Gangadhareshwara and Kalabhairaveshwara. The place where Lord Shiva sat and did penance is known as 'Jwala Peetha' or 'Agni Peetha'. Millions of devotees worship the place and peethadhipathis of Sri Kshetra will assume the Jwalapeetha thrice in a year - on Shivaratri, Navaratri and Jatrotsava.