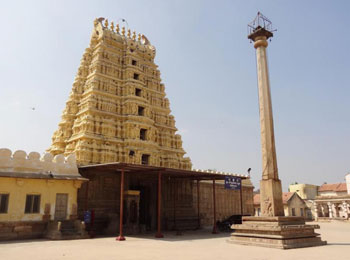 Dedicated to Lord Vishnu is the Saumyakeshava temple (also known as the Anantha Kshetra, Nagamangala Paniparaha Kshetra) right in the middle of the town of Nagmanagala, Mandya district (Karnataka). With the residing deity as Sri Soumya Keshava Swamy the temple is about a thousand years old and was constructed by Hoysala Pallegara Sri Jaya Deva Raya. The temple holds the Raghu-Kethu Pooja as the most important and well known ritual in the temple.

Built in soapstone and granite (12th century) the temple imbibes glimpse of of Hoysala, Vijayanagara and post-Vijayanagara features because of being renovated by the successful rulers of these times. The mahadvara, prakara and patalankana are symbolic of being added in the Vijayanagara period. The trikutachala temple has a garbhagiha, an antarala, a navaranga which has two shrines on the north and south respectively, a large pillared mahamandapa which opens into a jagati on the east; according to the temple plan.

Raised on a Jagati the temple holds the conventional mouldings (adhisthana, single plastered wall, an austere sikhara without the typical Hoysala carving, are still found retaining the majesty) and is stellate inside the Mahamanadapa in the Sanctum area. Standing on a Garuda pedestal the image of god Kesava (Saumyakeshava) in the sanctum is six feet high and holds a serene expression while being exquisitely sculpted. The Navaranga has its pillars and ceilings embellished with varied and attractive designs. Other important features of the temple are the seven storeyed lime and brick tower over the eastern entrance, the magnificent figures of the Gods and Goddesses and the other sub shrines.

It lies among the most ancient temples with attractive architectureal stone work. In front of the main Deity is the central manadapa which has intricately carved stone structures. In the middle of which is carved Adhisheshan-the head of which is Raghu and the tail as Kethu- around which are engraved 108 conches. Devotees who wish to perform the Raghu Kethu relief Pooja are asked to stand beneath the Adhisheshan. Some of the Poojas here are believed to get rid of problems which include: santana bhagya (wealth), mental illness, delay in marriage and overall wellbeing of a person.

During Mahabharatha, Lord Krishna planned to start war but he was worried about the Naga Asthra(Snake arrow) which if used by Karna could kill Arjuna. Hence Lord Krishna took control over all the Nagas of the world in his shank (which controls all Nagas). In this temple Adhishesh appears in a uniquely ancient position sitting on Mandala Akara on (A big conch which lies over a heap of 108 conches) Manatapa. Nowhere else in the world, can one find the Adhi Seshan sitting in Mandala Akara position beneath the Bhuvaneshwari Mandap sitting atop of shanku.

Deepa Aradhanam is done on Ugadi in the Karthik month and on Maha Shivrathri for the 51 feet high Garuda Gamba. On this day first a pooja is held for the Garuda and then the lamp is lit through the Sarpani. Before coming to the main sanctum of Sri Sowmya Kesava Perumal is the Bhuvaneswari mandapam with huge pillars on four sides.

Normally sanku is seen in left hand and chakra in right hand but in this temple they are changed. To the left is the sanctum with Lord Krishna and his consorts Rukmani and Sathyabhama and on the right sanctum is Sri Lakshmi Narashima sitting on five headed Adi sesha.

The place is (the Parihara Sthalam for Naga Sarpa Dosha and Raghu and Kethu) significant for curing any type of illness in body, mind and any weakness and for those longing for marriage or child.

Mysore holds the nearest airport to this place.

Mandaya holds the nearest Railway station to Nagamangala but can also be reached by busses from Pandavapura which go from Mysore.