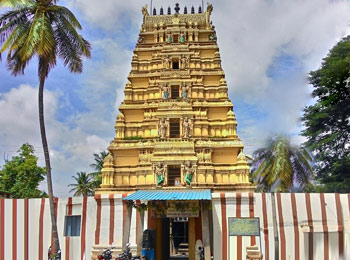 Located between Bangalore and Mysore The Ugra Narasimha Swamy temple lies in Maddur - a small town at the banks of Shimsha River. Maddur also known as Arjunapuri and Kadamba-punya Kshetra has special significance. The town is famous for three temples – Sri Ugra Narasimha Temple, Sri Varadaraja Temple and Maduramma Temple. 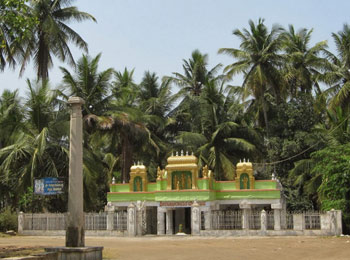 The renovation of the temple was carried out during the reign of Hoysala Kingdom. There are two Prakaras of which the outer wall is built like the wall of a fort; has a store room, kitchen and a place to store the Vahanas while the inner prakara has other small temples. Maddur for the devotees is a Divya Narasimha Kshetra. Other deities worshipped in the temple are Sri Srinivasa, Yashoda and Krishna, the consorts of Lord Narasimha – Srimati Sowmya Nayaki and Srimati Narasimha Nayaki, Sri Sita Rama Lakshmana and Hanuman. Hanumana stands to the left of Lord Rama which is observed in very few temples. 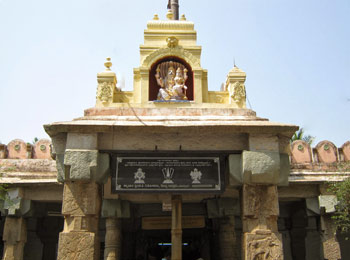 This deity is one of the most ferocious form of Lord Narasimha (with eight hands and three eyes) on earth. With two hands he tears Hiranyakashipu apart, with the other two he is holding the intestines of Hiranyakashipu which appear like a garland on the transcendental body and with the other four he holds the weapons of the Lord – Sudarshana (chakra / disc), Panchajanya (shankha / conch-shell), Pasha and Ankusha. Deity of Prahalad is to his right and to the left is the deity of Garuda who stands humbly praying to Lord Narasimha. While killing Hiranyakashipu his third eye was manifested.

Maddur was known as Arjunapuri during the Dwapara-yuga and was named after Arjuna(one of the Pandavas). Arjuna once asked Lord Krishna to appear in his most ferocious form- Narasimha to which Krishna replied that it was not possible for him to show that ferocious form. Lord Brahma got a Murthy carved out of the Narasimha avatar of Lord Krishna and placed it in Maddur. The place (Kadamba-punya Kshetra) got its name from Sage Kadamba who took bath in the river Kadamb (derived its name from Sage Kadamb) and worshipped Lord Narasimha.

How to Reach Maddur

Bangalore Airport is the nearest Airport.

The Mysore and Bangalore junction are the closest Railway stations.

The town is well connected by Rail and Bus from Bangalore and Mysore and is located between Channapatna and Mandya. The temple is on State Highway 17 on the route to Mysore from Bangalore.