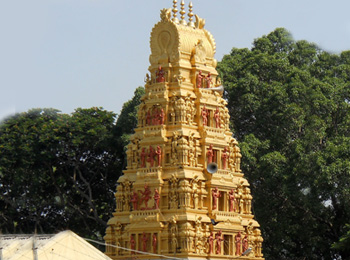 The temple was located on the bank of Cauvery River in Ganjam. It was constructed between 1578 and 1617. It was the capital city of Mysore at that time. Raja Wodeyar of Mysore installed Sri Nimishambhadevi, and constructed this Temple. 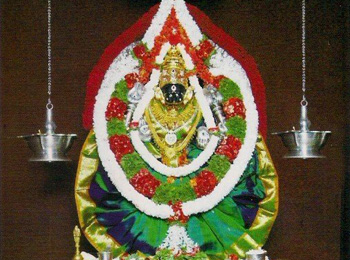 Inside the sanctum, there is an idol of the goddess with a ‘Sri Chakra’ carved out of stone. This Sri Chakra is believed to be inscribed by a king called as Muktharaja on a stone and then went into self-mortification. This Sri Chakra was installed along with the Goddess idol by the succeeding rulers of this place by then. Along with Goddess Nimishamba, there are other idols too inside the temple including ‘Mukthikeshwara’ (Lord Shiva), Ganesha, Surya Narayana and Hanuman. The cement sculptures of goddesses Lakshmi and Saraswati can be seen at the entrance on either side of the main tower. 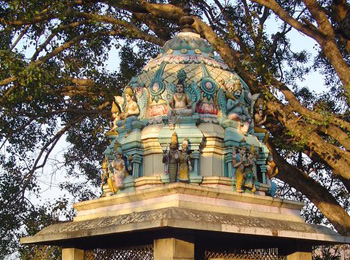 Nimishambha is none other than Goddess Parvathi, consort of Lord Shiva. “Nimisha” means a minute, and the presiding goddess of this temple is believed to grant your wish in a minute. That is why she is called Nimishambha. Muktaraja was blessed with the boon that Sri Nimishamba will come to his aid in his fight against the demons in a minute. That is why there is a deity Lord Shiva by the name of Moukthikeshwara.

As per the instructions of Sri Sri Parameshwara decided to conduct Poundareeka Yaga by Sumanaska for the benefit of earth/world, as per he given the responsibilities of this yaga to Mukthaka Rushi who is real Shiva. This matter was came to the Knowledge of Sriman narada by Janu and Sumandalas and they decided to abolish and giving troubles to this Yaga and consulted with their Guru (Teacher) Shukracharya in this matter, The said Janu and Sumandalas sent their army along with their ministers namely Shoorabahu and Ghatodaras, Their army was abolished and breaked by Mukthaka in a second of time, This matter heard by the said Janu and Sumandalas become angry and they prepared to conduct war along with Mukthaka Rushi personally and the battle going on strongly, In this said war Mukthaka defeated by them.

Jayanthi mahotsava will be held on Vaishaka Shudha Dashami day in every year. On this day Ganapathi Homa, Nimishambha Homa, Mruthyunjaya Homa, Lakshminaryana Homa are been rendered in the temple. Abhisheka Pooja with 108 kalasa to main deity Sri Nimishambha, Mukthikeshwara Swamy and narayana swamy. After Abhisheka, Maha-nivedhane and Mahamangalarathi will be performed as per temple rituals. In the evening, Shree Nimishambha Devi, Moukthikeswara and Narayanaswamy Utsava will be held righteously.

Durga Homa is being held by chanting moolamantra of Goddess Durga for 1008 times. Similarly, Japa is done by chanting the moolamantra for 108 times. (i.e. 1/10 part of Durga Homa Moolamantra). Aachamana, Devata Praarthane, Mahasankalpa, Ganapati Pooje, Punya, Kalasha Pooje, Durga Homa & Paayasam Offerings are also done. This is followed by the Poornahuthi after which Prasadam is distributed among the devotees.

Durga pooja by kalasa stapane with devi paarayana in the morning as well as in the evening, by chanting 700 slokas of devi as laid down in Markandeya Purana. Payasa Nivedhane will be offered to Goddess on this special occasion. On Durgastami day, Chandi Homa will be rendered with Poornavathi and Maha Naivedya Seva. Chandika Homa, by Chandi Parayana and Payasa Homa rituals. Ayudha Pooja, Saraswathi Pooja is being rendered and on Vijayadashami day, special Pooja, rituals are rendered in the temple. Every year, festivals like Shivaratri, Ugadi, Ganesha Chaturthi and Deepavali are celebrated.

The nearest airports are in Mysore and Bangalore. The nearest railway station is at Srirangapatna. It is also well connected by road.