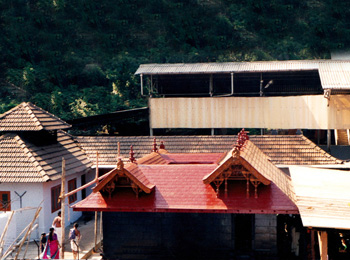 Kadampuzha Devi Temple is a Hindu temple and pilgrimage center at Kadampuzha, near Kuttippuram in Malappuram district, Kerala, India. The temple is dedicated to goddess Durga(Form of Goddess Parvati), a Devi. There is no idol in the temple.

The origin of Kadampuzha Temple is associated with the Mahabharatha, the ancient Indian myth, considered to be the greatest story ever told. However the temple as such was founded by Shree Shankaracharya and the month he consecrated Kadampuzha Temple, the day of Karthika in the month of Virshchikam (November – December) is considered the most auspicious day and is celebrated as the festival day. Shree Shankaracharya, during his Deshadanam, a pilgrimage to various parts of the country, came across this place while he was going to Chottanikkara Temple after his Darshan at Mookambika Temple. When he reached the place now known as Kadampuzha, he found that he could not walk cross and that his way was blocked by a Divine Presence. Even with the superior Sight that could “See” or “Understand” Divine presences, he could not fathom it. Perplexed, he meditated to understand why he failed to fathom the Divine Presence and within himself discovered that having attained the “Sarvaknanapeedhom”, his ego had somehow crept in to make him feel superior and that his ego was being shunned by the Divine Presence, making him unable to fathom it. The Divine Saint immediately set about cleaning his mind of any ego and made himself as humble and pure minded as an innocent child. He approached the Divine Presence again with utmost devotion and supplication and immediately perceived what the presence was and wherein it was emanating from. He marvelled at the Divine Presence of the Devi very strongly bonded with the Divine Presence of Lord Shiva and decided that the place should be treated with absolute reverence. He discerned that the Divine power is emanating from the hole in the ground and took steps to consecrate the place as a temple and also constituted Lord Narasimha and Sudarshana Chakra in front of the Devi and also decided to place Dharmashasta and Nagakanyaka or either sides of the temple. He also stipulated the poojas and rituals that must be conducted at the temple and these stipulations are followed till date.

The legends surrounding the Kadampuzha Devi are related to Arjuna, one of the heroes of the epic Mahabharata. Arjuna fought with god Siva during the Kirata incarnation (he was accompanied by Devi Parvathy during her Vanadurga incarnation). A demon named Mukasura took the form of a wild boar and started destroying the trees and shrubs around Arjuna. Arjuna was in deep meditation at the time, in order to get the Pasupathasthra (a divine arrow named "Pasupatham") from Lord Paramasiva.

Both Arjuna and Shiva shot at the wild boar and both claimed that his arrow had killed the animal. They argued, and finally agreed to fight a battle with bow and arrow. The victor of the battle would also get the honour of being the killer of the wild boar. The ensuing battle was fierce and Arjuna was defeated. Despondent over the defeat, Arjuna placed a big stone in front of him and started praying to the mother of the universe Parasakthi while showering flowers over the stone. He was amazed to see that the flowers fell at the feet of the Kirata and Kirati. He realised that those people were actually Lord Paramasiva and Devi Parvathy. The Lord and Devi Parvathy were pleased with Arjuna and gave him the Pasupathastra arrow.

Another legend says that Adi Sankaracharya, during his travels, once happened to pass through Kadampuzha, which was then grassland. At one place he could not pass further, as he seemed to strike an invisible wall. He understood it to be the meeting point of the Goddess Parasakthi in her Devi Parvati incarnation and Lord Parameswara in his "Kirata" incarnation. Adi Sankaracharya prayed to the Devi and she appeared before him. After blessing him, the goddess disappeared into a small hole in the ground. He did the first poojas to the devi there on that day in Vrishchikam (November–December) and the sanctum of the temple is said to have been built around that hole.

Karthikai day in the month Vrishchikam (November–December), is considered a special day and is celebrated in a grand manner at the temple.

How To Reach Kadampuzha Bhagavathi Temple

There are KSRTC and private buses directly plying to Kadampuzha from almost all centres of Kerala. The devotees coming by the Kuttippuram – Valanchery – Kottakkal road in N.H. 17 may get down at Vettichira Jn where from the (distance 2 km) road will lead them to the Temple. Devotees who come by train can get down either at Tirur station if they are coming from Magalore (distance 20 km) or Kuttipuram station if they are coming from Shornur (distance 19 km) from where buses and other conveyances are easily available to the temple. The nearest airport is at Karippur (distance 50 km) and the Cochin International/Nedumbassery Airport (distance 145 km) away from Kadampuzha. All major International flight services are operated from these airports.