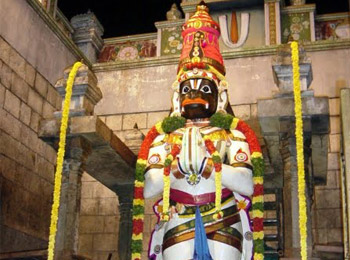 
The Sri Anjaneyar temple is dedicated to Lord Hanuman and is located in Alathiyur, in Malappuram, in Kerala, India. . 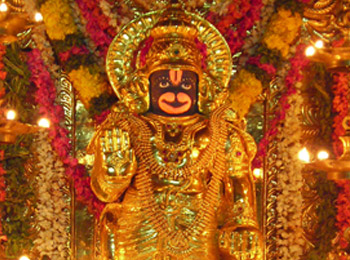 The Anjaneya temple in Alathiyur in Kerala was established by Sage Vasishta. It is a unique temple where the Sri Rama idol stands alone without Sita in the sanctum sanctorum. Hanuman has a shrine here in which he is seen listening to Sri Rama, who is describing the identities of Sita to help him spot her without doubt. There is a shrine for Sri Lakshmana a little further away. A spot here is built on a rock depicting the Sri Anjaneya's frog leap jump over the ocean to Lanka in search of Mother Sita. There are shrines for Sri Vinayaka, Sri Ayyappan, Mother Durga Bhagavathi, Lord Vishnu, Sri Badrakali in the temple.Alathiyur Hanuman Temple is a famous Hindu temple located at Alathiyur near Tirur, Malappuram district, Kerala state, India. Over the years the "custodians" of the temple were Alathiyur Grama Namboodiri, king of Vettam, and Samoothiri of Kozhikode.According to local myths, the "Purumthrikkovil idol" of the deity Hanuman was consecrated 3000 years ago by Vasistha, one of the Saptarishis. Even though the main deity of the temple is Hindu god Rama the temple is famous and known as a "Hanuman temple". The alathiyoor Perumthrikovil Temple is special to its devotees for very many reasons. The daily puja rituals, offerings by devotees, and the spectacular annual Temple Festival all are held in honour of the Presiding Deity, Sree Rama. However, the devotees popularly refer to this temple, the Hanuman Kavu Temple. And, in a way, it symbolizes the triumph of the supreme strength of Bhakti of Sree Hanuman as an ideal, which overshadows the presiding deity, Lord Sree Rama. Sree Rama is visualized as the Maryada Purushothaman he is separated from his beloved consort, Sita, by the mighty Ravana who has abducted her to Lanka. Sree Rama is seen entrusting Hanuman the possible task of locating the whereabouts of Sita. Sree Rama confides to Hanuman about how to look for Sita in Lanka. Hanuman, now, only has to cross the vast and formidable sea that separates Lanka from the main land. Thirty three Crore Gods have gathered to witness this significant Act. It is an act in which the Avatar purush Sree Rama seeks the assistance of his bhakta, Hanuman. All the Gods bestow Hanuman with their enormous strength, so that he succeeds in his mission. For Hanuman, this is very significant moment. This explains his pre eminence at alathiyoor. The temple of Sri Hanuman is adjacent to the main Temple of Sree Rama. Sree Hanuman stands leaning a little towards the left, to hear his master’s words. Sree Rama is confiding in Hanuman the cue word (Abhignana Vaakyam) that would enable him to gain the confidence of Sita. Hanuman has a mace in his hand. The numerous Gods bestowed their enormous power on Sree Hanuman. He is all set to accomplish his mission, which is seeking the whereabouts of Sita. Here he is the personification of divine strength, confidence, and concentration of purpose, Bhakti, and above all humility. He is the symbol of supreme self sacrifice. He seems to be assuring Sree Rama: Your wish is my commandâ€. Devotees of Hanuman throng to this temple to make their wishes and be heard by the mighty Hanuman. Sree Lakshmana is positioned to the West, within the temple complex but a few meters away from Sree Rama, outside the periphery of Naalambalam. It is believed that Sree Lakshmana was keeping himself at a small distance away, deliberately. Presumably to avoid being privacy to cue word (Abhignana Vaakyam) that Sree Rama was confident in Hanuman. 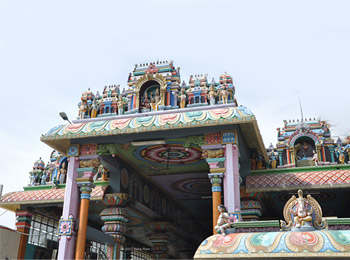 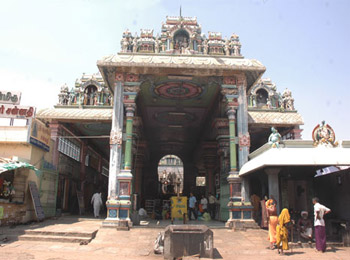 Festivals are celebrated in the temple in Aipasi (October-November) on Tiruvonam star day and on Hastham star day in Panguni (March-April) and on Aadi Amavasya day (new moon day in July-August). Aarti/Pooja/seva


Devotees believe that if they jump over the rock spot, they will be blessed with good health and longevity.  Children are taught to pray to Alathiyur Hanuman for a good sleep free of bad dreams.

The temple is situated in Alathiyur in Tirur Taluk in Malapuram district.


Near By Railway Station -Shoranur.


Near By Airport -Kozhikode