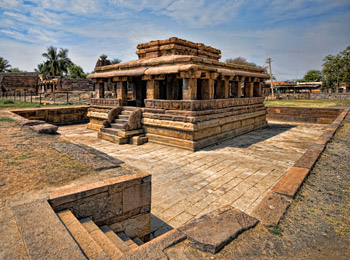 Aihole is known as the ‘Cradle of Indian rock architecture’. This city is located on the banks of River Malapraba in Bagalkot District, Karnataka. Built during the rule of the Chalukyas, the cluster of temples here belongs to two ages: the first took place during the 6th and 7th centuries AD and the second belong to the 12th and 13th centuries AD.

The Huchappaiya (Gudi) Temple is situated towards the west of Aihole and to the south of the Aihole Fort, on the way to River Malapraba. The temple dates back to the 8th century AD and is dedicated to Lord Shiva. It is inclusive of a mukha mandaba, a sanctum, a tower or shikara over the sanctum, a hall, ‘trimurthi’ figures on the ceiling and an inscription from the 12th century. The interior is laid with intricate carvings and big square pillars. In front of the temple, an image of Nataraja is carved in the ceiling and some of the pillars have figures of couples. The exterior walls of the sanctum sanctorum have three niches with Narasimma.


The nearest airport is Belgaum.


The nearest railhead is Bagalkot.


One can use any road service from Belgaum via Bagalkot to reach Aihole.