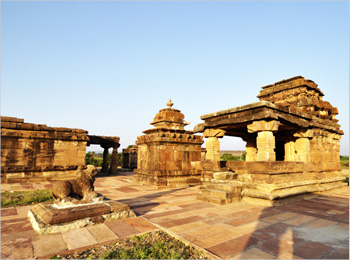 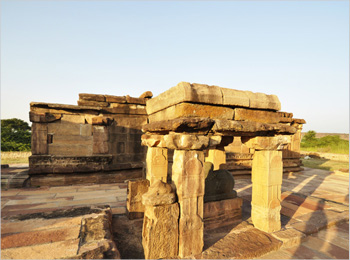 The gateway at the entrance to the Galaganatha Temple Group is noteworthy. Pillars are embellished with the pot and the foliage motif and the lintel is sculpted with foliated makaras. In Hindu mythology, makara, a mythical creature which is a water monster, is the vahana or vehicle of Ganga and Varuna. It is also the insignia of love god Kamadeva. The temples have a curvilinear shikara or spire about the Garba Griha or sanctum sanctorum, and images of the deities of Rivers Ganga and Yamuna at the entrance to the shrine. This is a typical feature of Chalukyan architecture. The Galaganatha Temple enshrining Shiva as a presiding deity. The huge temple is east facing and situated along River Tungabhadra. There is a huge Shiva Linga in a closed hall here which is known as Sparsha Linga. The basement of the temple is unusually pyramidal and there is a huge open hall. The gopura or tower is embellished with plain architectural elements but the wall panels at the back of the hall are adorned with remarkable decorations. There are numerous niches in the interior of the temple with figural sculptures including that of Lord Ganesha. 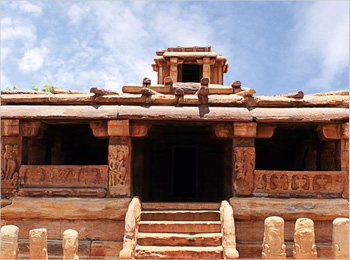 The history of Galaganatha Group of Temples is in fact the history of Aihole, the cradle of ancient temple architecture. When Aihole was the Chalukyan capital, the rulers built over 125 temples in varying styles. The Chalukya king, Pulakesin II was an ardent follower of Jainism. During his reign, there was an architectural extravaganza not only at Aihole, but also in the regions of Badami, Pattadakkal and other places. In the 17th century, Aurangzeb annexed the Deccan and Aihole too came under Mughal rule. The Chalukya dynasty was ousted by their own district officers, the Rashtrakutas, in AD 757. Thus, gradually, Aihole became a part of the Bahmani and other local Muslim dynasties.The erstwhile name of Galaganatha was Palluni. The Galageshwara Temple of Shiva was built around the 11th century. It is recorded that Sri Venkatesh Galaganath, also known as Kadambari Pitamaha, used to worship here and wrote his novels at the Galageshwara Temple premises.

There is a large inscribed slab in the open hall of Galageshwara Temple dating from 1080 AD onwards. The date throws light on the era when the temple was constructed. From the inscription we can gather that the tradition of performing arts, including dance and music, was prominent during this time. Performing arts attained high levels of development in the 11th century AD. From an inscription of the Chalukyan king, Vikramaditya from Galagnath, we can infer that a certain Mokhari Brammayya was a musician of high order during this period.