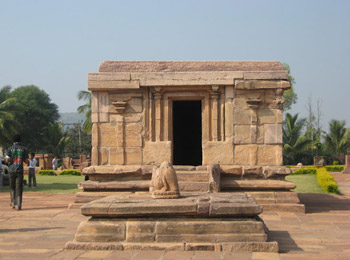 Pattadakkal, known as the ‘City of the Crown Rubies’, is a World Heritage Site. It is famous for the Chalukya monuments and is a village situated in Karnataka, Bagalkot District on the banks of Malaprabha. It consists of ten temples, each of which displays interesting architectural features. Nine of the temples are Hindu and the remaining one is Jain. These 7th and 8th century monuments still stand tall with the passage of time and attract tourists in numbers.﻿ The state capital Bangalore is 514 km away, while Badami is 22 km and Aihole is about 10 km away from Pattadakkal.

The Chandrashekara temple is a small temple of about 15 feet high and is situated on the left side of the Sangameswara temple and is situated between the Sangameswara and Galaganatha temples. The architecture of the Chandrashekara temple is quite simple. The temple stands on an adhishthana. It has a small and receding garbhagriha (sanctum sanctorum) and a closed hall. The garbhagriha houses a lingam on a pedestal. The exterior of the temple is decorated with pilasters at regular intervals. There is a niche on either side of the garbhagriha. There is a dwarapala (gate keeper) standing on either side of the garbhagriha. There is no shikhara (tower) over the shrine. The doorframe of the hall is carved. On architectural grounds, this temple may be assigned to 750 A.D.

The Bangalore Airport is the nearest.

The nearest railhead is Badami.

Pattadakkal is linked with Badami by roads. Pattadakkal and has connectivity with other major locations by road.