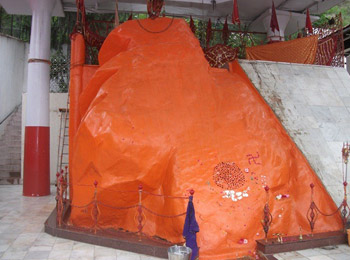 Hari Parbat, or Koh-e-Maran,is a hill overlooking Srinagar, the largest city and summer capital of Jammu and Kashmir. It is the site of the Durrani Fort and has a notable religious dimension for the Hindus, Muslim and Sikhs alike, hosting a famous Hindu temple, two shrines of locally venerated Muslim saints and a Sikh gurudwara 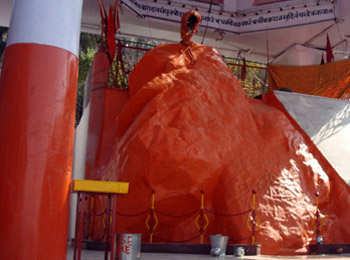 The premier fortification on the site was built by Akbar, the Mughal emperor in 1590. The outer wall was constructed by Akbar and the Hari Parbat Fort along with Hari Parbat Fort fort travel, Hari Parbat historical, Hari Parbat Fort tourism etc in 1590 A.D. which cost around one crore and ten lakhs rupees. This large amount was taken from the Royal Treasury. Besides this, there were Indian artisans who came up with their skills in masonry work. There was an inscription in Persian language at the Kathi Darwaza. His intention was to lay down the foundation of a new capital within the fort and named it Nagar Nagor. One can view the ruins of some terraces even today on the side of Pokhiri Bal. This fort was constructed by Azim Khan at the hilltop. But the project was never accomplished. The present fort was constructed in the year 1808 during the reign of Shuja Shah Durrani. The Hari Parbat Fort is considered to be constructed during the 18th century by Atta Mohammad Khan, a governor of Afghanistan. In the proximity of outer wall, there is a Guru Dwara which has been commemorating the visit of Guru Hargobind Singh. There is an old wall and it stretches to 5-km and has 10 meters height having two gates, sangin darwaza and the Kathi. The Kathi is the major entrance with having Persian inscriptions all around it.The fort consists of a temple known for its image of the Sharika Goddess. There is Shrine of Guru Chatti Padshahi outside the southern gate of the fort and a shrine to the sixth Sikh guru as well. It is called as the Chatti Padshahi. The hill, which rises to 122 m from the floor of the valley, and is abounded by orchards of almond trees where people gather for picnics during months of summer and spring. The first fortifications on the site were constructed by the Mughal emperor Akbar in 1590 who built an outer wall for the fort as part of his plans for a new capital called Nager Nagor. The project, however, was never completed. The present fort was built in 1808 under the reign of Shuja Shah Durrani. 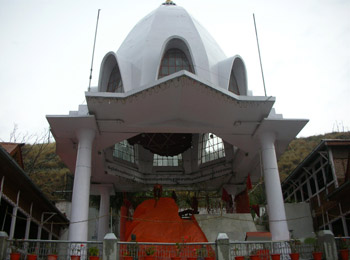 The hill is considered sacred by the Kashmiri Pandits and hosts a temple of Shakti, or Goddess, which is located in the middle part of the western slope of the hill. Shakti is worshipped there under the name Jagadamba Sharika Bhagawati (or simply Sharika) and depicted as having 18 arms and sitting in Shri Chakra, an emblem of cosmic energy pervading the universe. The hill is also called Pradyumna Peeth. On the day celebrated as Sharika's birthday, devotees make a sacrificial offering of taher-charvan to the goddess (taher - rice boiled with turmeric powder and mixed with oil and salt; charvan - cooked goat liver). This day is also called Har Navum.

Makhdoom Sahib, Srinagar. The southern side of Hari Parbat features Makhdoom Sahib, the shrine of Hamza Makhdoom, a 16th-century Kashmiri Sufi saint locally known as Hazrat Sultan and Sultan ul-Arifeen. Another shrine on the hill's southern slope is dedicated to Shah Badakhshi, a 17th-century Sufi saint. Gurdwara Chatti Patshahi, Rainawari, Srinagar Gurudwara Chatti Patshahi at Kathi Darwaja, Rainwari, Srinagar is one of the most important Sikh gurudwaras in Kashmir. It is believed that Guru Har Gobind, the sixth Sikh guru, travelled through Kashmir, stopping to preach occasionally and stayed there for few days

Legend has it that Kashmir was a big lake called "Satisar" inhabited by a cannibalistic demon called Jalodbhava ("Water Demon") who tortured and devoured Nagas (The local inhabitants). The inhabitants approached Nilaga for help who approached his father, Kashyap ,a great sage and grandson of Brahma . He did a long penance to rescue people from tyranny of cannibal. He was blessed and was able to cut the mountain Near Baramulla .The lake was drained and the demon was killed by divinely cast pebble which today stands as "HARI PARBAT"

Another version of the myth says that two demons, Chand and Mund, lived in the Kashmir Valley. Chand hid in the water near the present location of Hari Parbat and Mund somewhere above the present Dal Gate, and both terrorized the people of the Valley. The gods invoked Shakti who assumed the form of a hari (myna) and flew to Sumer, picked up a pebble in her beak and threw it on Chand. The pebble grew into a mountain, crushed the demon and was later named Hari Parbat ("the Myna Mountain").

Srinagar has just two climates, summers which are pleasant and winters which are quite freezing and chilly. There is scanty rainfall. So the best suitable time for visiting Srinagar is April –October. The summer season is best for sightseeing and is also the peak time for tourists having a highest temperature of 30°C and lowest of 14°C. The winter season has minimum temperature of 0°C and highest of about 15°C. There is heavy rain during winters. It is not apt for sight-seeing as lakes are frozen and even snowfall causes blockages of roads which creates problem for tourists. Srinagar is a famous tourist spot. People visit during summers for seeing the sights of the lakes and fabulous gardens and also the natural splendor is at its zenith during this season. However the winters are extremely cold as well as freezing and should be avoided for holidaying. There is heavy snowfall during the winter season.

The domestic airport of Srinagar is connected to major cities of the country. There are regular flights operating between Srinagar and Delhi, Chandigarh, Mumbai and Shimla. The International visitors avail the flights from Delhi International airport found at 876 km distance from Srinagar.

Jammu is the close by railway station to Srinagar, found at 290 km away. The railway station of Jammu is well connected to different major cities of the country by rail services. There is regular and direct train service available from Chennai, Delhi, Trivandrum and Bangalore.