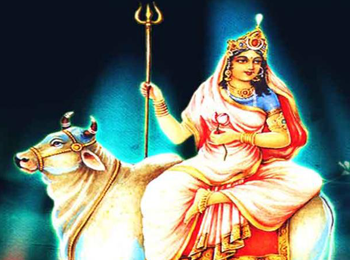 Shailputri is the first form amongst Navadurga or nine forms of Hindu goddess Durga or Shakti, worshipped on first day during the Navratri celebrations – the nine divine nights. She is the first among Navadurgas and the first day of Navratri pooja is dedicated to Durga Shailaputri. Variously known as Sati, Bhavani, Parvati or Hemavati. Maa Shailaputri is the absolute form of Mother Nature. She is also known as Goddess Parvati the consort of Lord Shiva and mother of Ganesha and Kartikeya. In the Navratra festival the worshiping Mother Goddess has a half moon in her forehead & she is holding a trident in her right hand & lotus flower in her left hand. she rides on mount Nandi (bull).

She is daughter of Himalaya and first among nine Durgas. Shailaputri literally means daughter (putri) of the mountain (shaila). Goddess Durga was born in the house of King of Mountains “Parvat Raj Himalaya”, so she is called “Shailaputri” means the daughter of mountain. Variously known as Sati Bhavani, Parvati or Hemavati, the daughter of Hemavana - the king of the Himalayas.

The embodiment of the power of Brahma, Vishnu and Shiva, she rides a bull and carries a trident and a lotus in her two hands. In previous birth, she was daughter of Daksha. Her name was Sati - Bhavani. i.e. wife of Lord Shiva. Once Daksha had organized a big Yagna and did not invite Shiva. But Sati being obstinate, reached there. Thereupon Daksha insulted Shiva. Sati could not tolerate the insult of husband and burnt herself in the fire of Yagna. In other birth, she became the daughter of Himalaya in the name of Parvati - Hemavati and got married with Shiva. As per Upanishad, she had torn and the egotism of Indra, etc. Devtas. Being ashamed they bowed and prayed that, "In fact, thou are Shakti, we all - Brahma, Vishnu and Shiva are capable by getting Shakti from you."

In some scriptures like Shiva Purana & Devi-Bhagavata Purana the story of Mother Goddess is written as follow: Maa Bhagwati in her earlier birth was born as a daughter of Daksha Prajapati. Then her name was Sati and she was married to Lord Shiva. But in a sacrificial ceremony organized by her father Prajapati Daksha, she got her body burnt in the yogic fire, because she could not bear the insult of her husband Lord Shiva by her father Prajapati Daksha in the sacrificial ceremony.

In her next birth she incarnated her as Goddess Parvati, the daughter of Parvat Raj Himalaya and among Nava Durgas she has been referred to as Shailaputri, who was again known as Hemavati. In her Hemavati aspect, she defeated all prominent gods. Like her previous birth, in this life also Maa Shailaputri (Parvati) got married with Lord Shiva. The first and the most prominent among Nav Durgas, Shailaputri is of immense importance and her glories are endless. On the first day of Navratri worship it is she who is worshipped.

She is Devi of the root chakra, who, upon awakening, begins Her journey upwards. Sitting on Nandi and making her first journey from the Muladhara chakra. As from her father to her husband – the awakening Shakti, beginning Her search for Lord Shiva or making a move towards her Shiva. So that, In Navratri pooja the first day Yogi’s keep their mind concentrated on Muladhara. This is the starting point of their spiritual discipline. They started their Yogasadha from here. Shailaputri is the Muladhara Shakti to be realized within Self and sought for higher depths, in the yogic meditation.

Shailaputri means the daughter of the Himalaya. SHAILA is the derivative of the word SHILA. Shila means a rock, a stone. It is the rock of spiritual standing and the whole world gets strength from the Shailaputri aspect of Purna Prakriti DURGA.

From the Yogic point of view, the First Navratri is considered to be very auspicious day. This is the Yogic start for being in tune with the Divine Mother Durga. Those who want to have any kind of initiation in the Shakti Mantras, can have it on the First of Shukla Pratipada.

The aspiration of a devotee is to reach higher and further higher, for spiritual evolution, and for the attainment of Siddhi, which is perfection associated with Ananda (bliss). Verily, Shailaputri is the Muladhara Shakti to be realized within Self and sought for higher depths, in the YOGA-maditation. This is an experience in the soul-searching of Immutable within human existence. Shailaputri is the physical consciousness of the Divine Mother Durga. She is truly PARVATI, daughter of the King Hemavana, as described in the Shiva Purana. Shailaputri is the manifestation of this earth planet, which includes what is apparent on this earth, and within the globe. Shailaputri covers all the hills, vales, water resources, seas and oceans, including atmosphere.

Therefore, Shailaputri is the essence of the earthly existence. Her abode is in the Muladhara Chakra. The divine Energy is latent in every human being. It is to be realized. Its color is crimson. The Tattva(element) is Earth, with the Guna(quality) of coherence, and with the Bheda(distinct) characteristics of Ghraana(the smell).

How to Reach Mata Shailputri

The Nearest Airport is in Srinagar.