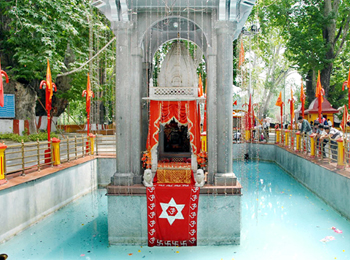 Kheer Bhawani is a temple dedicated to the Goddess Kheer Bhawani (originally just Bhawani) constructed over a sacred spring. The worship of Kheer Bhawani is universal among the Hindus of Kashmir. The temple is situated at a distance of 14 miles east of Srinagar near the village of Tul Mul. The term kheer refers to rice pudding that is offered in the spring to propitiate the Goddess, which became part of the name of the temple. As is the custom with Hindu deities, she has many names: Maharagya Devi, Ragnya Devi, Rajni, Ragnya Bhagwati, and so on.

The main Spring of Goddess Shri KSHEER BHAWANI JI is an irregular septagonal shape with Apex called PAAD (feet) to the east and the opposite side called SHAER (head). It has an island in the centre where mulberry tree grew. The Idols (murties) which are housed in the temple have been taken out from this very spring. The water of the Spring changes its colour from time to time. The colours are usually found to be red, light green, lemon yellow, milky white, grey etc. There is no definite time for its change of colour. A shade of black colour is supposed to be inauspicious. There are bubbles arising out of the water of the spring and forming different shapes and chakras (mystic symbols). The devotees are not supposed to take any non-vegetarian foods before visiting the Holy Shrine. The Holy Spring was discovered on Ashad Saptami (seventh day of bright fortnight in the month of Ashad), the day on which the sun occupies its highest position in the heavens.

It is the most important temple for the followers of Historical Vedic Religion in Kashmir, known as the Kashmiri Pandits. Around the temple is an area covered with smooth and beautiful stones. In it are large, old-growth chinar trees beneath which the pilgrims sit or sleep on mats of grass. While most of the colours do not have any particular significance, the colour of the spring water changes occasionally. When black or darkish, it is believed to be an indication of inauspicious times for Kashmir. In 1886, Walter Lawrence, the-then British settlement commissioner for land, during his visit to the spring, reported the water of the spring to have a violet tinge. Kashmiris claim to have observed a darkish or murky tinge to the water just before the assassination of Indira Gandhi and the 1989 insurgency in the valley.

Maharagya was pleased with the devotion of Ravana and appeared before him and Ravana got an image of the Goddess installed in Sri Lanka. However, the Goddess became displeased with the vicious and licentious life of Ravana and so didn't want to stay in Sri Lanka. Therefore, she is believed to have instructed Lord Hanuman to get the image from Sri Lanka and install it at the holy spot of Tul Mull. Though Ragniya is a Rupa of Durga, this one is a Vaishnav Rupa in Kashmir Ragniya is also known as Tripura, while in (Sri) Lanka, the Mother Goddess was called Shayama. Sita too, is believed to have been an incarnation of Ragniya. Ragniya Mahatmya has it that those who meditate on Panch Dashi Mantra during Nav-reh, Mother Ragniya grants their wish.

It is said that the night during which Mother Goddess came from (Sri) Lanka to Kashmir was named Ragniya Ratri In Kashmir a number of shrines are deciated to Mother Goddess at Tiker, Bhuvaneshvar, Manzgam (Noor-abad) Bheda, Lo-qraer-pur, Mani-gam, Rai-than and Baed-pur, but the Shrine at Tul-Mul is the most famous one and hence the focus of yatris. 360 springs (nagas) are said to have gathered there. Ragniya is a Sattavie form of Mother Goddess, i.e. the form of tranquility and bliss.

The mention of Kheer Bhawani is found in Kalhana's Rajtarangini. Kalhana writes that the sacred spring of Tula Mula is situated in a marshy ground. The name of the spring is Mata Ragini Kund (pond). Maharagini is the form of Durga Bhagvati. The brahmins of Kashmir worship this spring and pilgrims from every comer of the country visit to have the darshan of the place.

In Rajtarangini, Tula Mula and the spring of Maharagya have been considered very sacred and the brahmins of Tula Mula considered notable for their spiritual prowess. Thousands of years ago, many floods occurred in Kashmir and the sacred spring of Tula Mula was inundated under its sway and the holy place could nowhere be traced. At last, Kashmir's Yogi Krishna Pandit had a dream in which the Goddess appeared to him and directed that she would swim in the form of a snake at the proper place and that he should stick large poles to demarcate the holy spot in the marsh land. Subsequently, when the water subsided there the holy spot was discovered. This event happened during the Samvat 4041 (Hindu lunar date).

Abu'l-Fazl ibn Mubarak in his book Aini-Akbari mentions the area of Tula Mula extending over a region of hundred bighas (unit of land area) of land, which used to sink in the marshy lands during the summer season.

Swami Rama Tirtha and Swami Vivekananda also visited here to have the darshan of the place.

In the past, with incessant offering of milk and sugar candy in the spring by pilgrims, a thick layer of offerings had accumulated at its base. When it was cleared, the ruins of an old temple and shrine slabs engraved with figures were discovered. Here many images were also found but nobody rebuilt the temple till the Samvat 1969 (Hindu lunar date) when Maharaja Pratap Singh who was the disciple of the Goddess, got a temple of marble made in the midst of the spring which shines like a pearl in a shell. The marble temple was completed in 1920s. Some people are of the opinion that there was a mulberry tree near holy spot of Kheer Bhawani which, in local language, is called tul mul. But tul mul is also derived from the Sanskrit word atulya mulya meaning great value. It is believed that Ravana, after his worship of the Goddess, offered her kheer (rice pudding), which she accepted and since then it is called Kheer Bhawani.

An annual festival is celebrated by the temple on the occasion of Shukla Paksha Ashtami. On the particular day, devotees observe a fast and gather at the temple to pay their homage to the Goddess. Likewise, Jesht Ashtami (May-June) is another occasion, when people come from and near to have a glimpse of the Goddess. It is said that on this day, the spring changes its color with the blessings of the Goddess. The festival is concluded with 'Maha Yagna' to please Ragnya Devi.

How to Reach Kheer Bhawani Temple