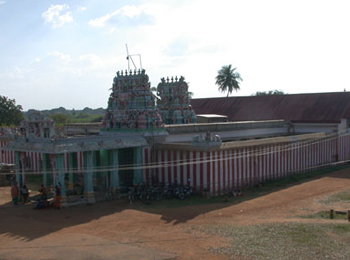 The temple is situated in a small village about 13 km to the east of Sivagangai, called Ariyakurichi is 2 km south from the village 'Kollangudi', which is located on the way to 'Thondi' from Sivagangai. 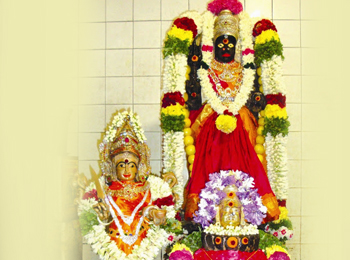 The temple has a small tower at the entrance and Lord Muruga and Lord Ganapathi on either side of it. The God, who can be seen through the main tower entrance, is Lord Vettudaiya Ayyanar. Wearing Panjakatcham and Yogasana Pattai. hip near the left leg and Thanda at right hand with Sandal Puttu at magudam he appears. Instead of convoluted lock, which Ayanar generally has, He has a lock of fire. Ayyanar is called as 'Maha Sastha' like 'Bala Sastha' of Sabarimala, Ayyappan. Ayyanar is with His consorts 'Poorna' and 'Pushkala' 'Artha Mandapam', a building which leads to sanctum sanctorum, has the idols of Lord Murugan and Lord Vinayagar. Karuppa Velalar statue is situated outside the Arthamandapam right side to Ayyanar, who performed poojas on the back of the hearts around 60 villages. He sitting on the horse appears beneath Dwaraga Palagar. They are Kurichi plants are abundant in the forest area hence it is called Ariyakurichi. Diagonally apposite to Ayyanar has the Sanctum sanctorum of Goddess 'Vettudayar Kali', looking towards the west. There was no idol 200 years ago at the spot, where the stone idol exists now. The stone idol replaced the mud idol some sixty years ago. The temple has the idols of Lord Anjaneya, Solamalaisamy, Lord Meenakshi Sundareshwarar and Lord Thirumal. Lord Karupanaswamy is not inside the campus of the temple. 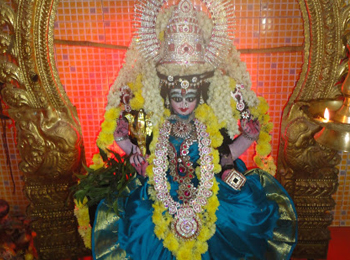 Kali is the symbol of courage and Valour. She is in a sitting posture with Her left leg crossed and the right leg lying on the demon and with a Trident (Scepter) symbolizing a weapon to uphold goodness and honesty. Kali has eight hands with weapons of many sorts, meant only to destroy that evil things, in each hand.

Once Parvathi, the consort of Lord Siva, playfully closed the eyes of Lord Siva. That resulted in the black out of fourteen worlds. She was punished by Lord Siva to be born in the world as Kali. 'Kalam’ in Tamil means 'Black'. 'Kali' is one who is black in complexion. Kali killed Sandasuran, an evil demon who had been giving trouble to the Devas. The place in which the Devas stayed is 'Devakottai', the place where they saw 'Kali' or 'Devi' is 'Kandadevi', the place where the Sandasuran Therkodi broken is called 'Kodikulam' , the place in which 'Kali' defeated Sandasuran is 'Vetriyur', the place he conquered is called 'Vettriyur' and the place where the Devas showered the flowers is called 'Poongudi'. After which she went to Kalayarkoil to worship 'Kaleeswarar' (Lord Siva) and to get redeemed from Her punishment and then she became 'Umadevi' (Parvathi).

The queen of Sivagangai was on her way back to Sivagangai after attending the funeral of her husband who was killed by the British General Kernel Joseph at Kalayarkoil. The British force was following her secretly. At Ariyakuruchi they asked a young girl who was there to feed her cattle about the whereabouts of the queen, who refused to reveal anything. The soldiers killed her by cutting her head. She was then prayed as Kali. Later the queen of Sivagangai, Velu Natchiar, donated a lot of arable land to this temple. She even gave away her diamond mangal sutra to the goddess as an offering. Kali upholds morality and punished the evildoers and perjweers when the affected devotees pray her for justice. They pray her and cut some coins into two with a chisel and mallet, praying to her to do justice to them. As she was killed by the rulers without any justice she will be very angry with the people who are misusing their power on innocents.

Daily 4 Pooja are performed in this temple.

Panguni Swathi festival in March-April; Vinayaka Chaturthi in August-September; Aadi Perukku in July-August, Navarathri in September-October; Margazhi poojas in December-January and Full moon day – Poornima poojas are the festivals celebrated in the temple.

There is a belief that they should worship another Goddess who dwells in 'Karungulam' near Kandaramanickam (Tiruppattur) 'ParaNachiAmman', within one year after worshipping Vettudaiya Kali.

Devotees believe that a prayer placed at the feet of Mother for relief from poverty, illness and mental agony is mercifully responded by mother without fail. They also go to Mother Kali to punish those who did wrong to them and for reunion of those separated due to evil effects.