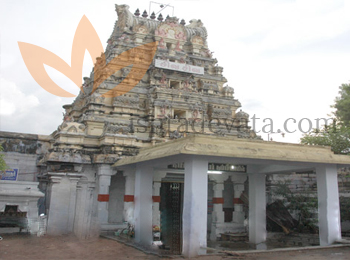 Thiruputhur is a small town. The Shiva temple is big. This 15-acre (61,000 m2) temple has a main vimanam with several stucco images on the east side and has 3 prakarams (outer courtyard). The outer 3rd prakaram (outer courtyard) is a wide courtyard on all the 4 sides. In the 2nd middle prakaram (outer courtyard) there are shrines for Lord Subramanya along with His 2 consorts Valli and Deivaanai . The shrine for Tiruttalinathar is situated at an elevated portion and is facing east. The shrine for Sivagami is situated parallel to the north of the main sanctum sanctorum and is also facing east. The mandapam in front of the sanctum sanctorum has pillars with beautiful sculptured images of Rishabavaaganar, Narthana Ganapathy, Venugpolan, Narasimhar etc. Interesting metal images of Rama, Sita and Lakshmana are also seen here. Stone images of Nataraja and Sivakami are seen in this temple. The Yoga Bhairavar shrine (facing West) is of significance here. Interesting metal images of Rama, Sita and Lakshmana are also seen here. The Navagrahams are in a seated posture.

Entering the 3rd inner prakaram(outer courtyard) from the east side, one can see the small shrines for Sun God Sooriyan, Mahalakshmi, Mahaganapathy, Dakshinamurthy, Varunalingam, Visalakshmi Amman, Agasthiyalingam, Sandeswarar and Durgai on the 4 pathways of the prakaram(outer courtyard). The sthala vriksham is Konrai tree and the Theertham is called as Garuda Theertham. The place where Sage Valmiki performed penance here is shown behind the sanctum sanctorum. Indira’s son Jayandan has a place in Skanda Mahapurana. He was abducted by demon Padmasura as he resisted the demon to rescue his mother. Lord Muruga rescued Jayandan from the demon. He has a separate shrine in the temple. A festival is conducted for Jayandan in Chithirai-April-May. It is said that Lord Maha Vishnu worshipped Lord Tiruthalinathar in this temple. His shrine is behind the sanctum in the name of Lord Yoga Narayana. Mothers Sridevi, Bhudevi and Sri Anjaneya are nearby the Lord. There is also a shrine for Lord Tirunageswarar where people worship during Ragu Kalam time. Lord Muruga is facing north with His consorts Valli and Deivanai. Saint Arunagiriar had praised Lord Muruga of the temple in his Tirupugazh hymns. Lord Nataraja graces in His Gourithandava dancing form. Lord Dakshinamurthi graces alone without His disciples. All planets-Navagrahas are in sitting form. The temple has many such sacred features.

Lord Shiva in the temple is a swayambumurthi. The presiding deity lord shiva is called as Tiruttalinathar, Sreetalinathar and the Ambal his consort mother Parvathy is called as Sivakami, Soundarya Nayaki. Hiranyakshkan, a staunch Shiva devotee had two sons Andakasura and Sambasura. Though they were Shiva devotees, they harassed the Devas who sought asylum at the feet of the Lord. Lord Shiva with His Viswarupa killed Andakasura and Sambasura. This form of Lord Shiva is but the Lord Bhairava. Though He killed the evil demons, as killing is a sin, to relieve Himself of this dosha, Bhairava performed Shivalinga Puja in the temple. He is worshipped as Yoga Bhairava. Devotees dress Him with white silk vastras. He does not have His dog vahan as He graces here in a Yogic posture.

Sage Valmiki, to correct himself from the cruel activities as robbery and murder he was indulging in earlier (this theory and story is strongly refuted by eminent scholars of Ramayana) performed penance here dense with Kondrai trees. As he was in penance for too long a time, he was covered by an ant-hill-Vanmeekam in Sanskrit and Puttru in Tamil. Pleased with his penance, Lord Shiva granted darshan to the sage. As Lord granted darshan near the Puttru, He is praised as Puttreeswarar. The temple is built on this Darshan story. The place also is named Puthur with the auspicious prefix Tiru – Tiruputhur. Kings built the temple later.

A one day festival is dedicated to Lord Yoga Bhairava on the first day of Chithirai falling almost on April 14. He comes in procession on Horse vahan. Ashta Bhairava Yajna is performed for six days during the Champaka Sashti festival in Karthikai-November-December. This is an important event in the temple.

Those unable to visit specific Navagraha temples, may seek relief in this temple worshipping Lord Yoga Bhairava. He is also praised as Aabath Dharana Bhairava as He rushes to the rescue of his devotees when in danger. On Ashtami days – 8th day of new moon and full moon fortnights, devotees worship here with cosmetic items.