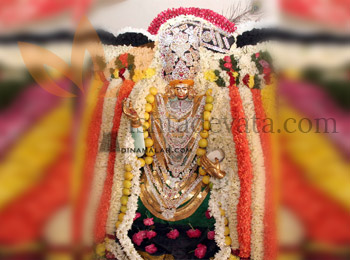 The Very famous Ujjaini Om Maha Kali Amman Temple is located in Mahalikudi, very near to Samayapuram, Trichy in Tamilnadu (India). It is about 1 kilo meter in the south east direction from Samayapuram. The Main Goddess here is Ujjaini Maha Kali Amman and faces north. This temple is 500-1000 years old. 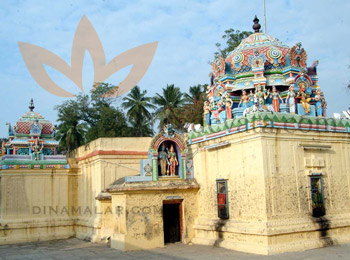 Lord Shiva with Mother Uma Devi on His left appears as Arthanareeswara, Mother Goddess had taken this position in this temple with a single breast. Sri Ananda Sowbaghya Sundari temple is the only one where such a form can be seen.

Idol of Goddess Ujjaini Kaliamman offered by King Vikramaditya graces in the temple. As a proof of this, there are idols of the Vedala (a ghost associated with the story of Vikramaditya) and that of his wise minister Kaluvan. It is noteworthy that Vedala is not in idol form in any other temple.

There is an Aananda Nardana Vinayaka (dancing form) idol made of Aimpon and also a Vinayaka idol offered to the temple by Sri Kanchi Maha Periaval, Sri Chandrasekharendra Saraswathi Swamigal.

Karuppannasami is an important deity in the temple who is always locked with hand-cuff. It is said that the deity would ever be in the shrine bound by the lock. Only during festival days, the shrine is unlocked. He will be independent and would escort the Goddess on the car festival day. Soon the car (Rath) reaches the shed, Karuppannasami would be locked again.

The Eka Kalasa design is generally found on the Vimana (tower) on the sanctum sanctorum only in Shiva temples. Such a pattern is followed in this temple also. As a tradition, more Kalasas are found in Goddess’s temple. The Eka Kalasa reminds the fact that Lord Shiva is here in the Goddess form.

Generally Lord Valampuri Vinayakar and Lord Subramanian grace at the entrance of the temple in left and right sides, here it is vice-versa. A Shivalinga is sculpted on the wall.

There is a sculpture of Lord Krishna as a crawling child tied in the Pinnai tree on the outer corridor (prakara) of the temple. His head is tonsured. In another shrine, Aiyanar with all ornaments appears with the elephant vehicle in front of Him. Goddesses Kamakshi Amman, Ikcha Shakti, Gnana Shakti and Kriya Shakti grace in the walls of the prakara in idol forms. Sri Srinivasa Perumal with Mother Lakshmi graces from another shrine. The Guardian deity of Madurai, Madurai Veeran graces here too with his consorts Bommi and Vellaiammal.

Presiding deity Azhagammai appears very beautiful with four hands in a standing form. Ananda Sowbagya Sundari has only three hands while she has four, eight or twelve hands as a rule. She has a skull in one hand, trident in the second and a torch in the third. Though she appears ready to kill a demon, her face is very calm and smiling. She doesn’t have any fierce tooth on sides as Kali generally appears. That is why, the Kali is named Ananda Sowbagya Sundari showing that She is very happy after destroying the demon.

The temple emphasizes the philosophy that Lord Shiva and Mother Shakti are but one, hence the Arthanareeswara form. It is said that Mother Parvathi wanted Poojas for Her as to Lord Shiva and the temple came into being on this background story. Mother Aananda Sowbagya Sundari graces the temple representing this Shiva-Shakti Aikiya (Oneness) philosophy.

10 day Navaratri during the month of Purattasi (September-October), 21day Agni Nakshathra are the festivals celebrated in the temple besides special Poojas on Purnima (full moon), Amavasya (new moon) and Ashtami (eighth day either from new moon or full moon days).

People perform abishek with new vastras to the Goddess as a prayer commitment.

Devotees pray for removal of obstacles in marriage talks, for child boon and progress in education.

The nearest railway station is in Trichy.

Maha Kali temple is 2 kms from Trichy Samayapuram. Minibus and autos are available for conveyance.