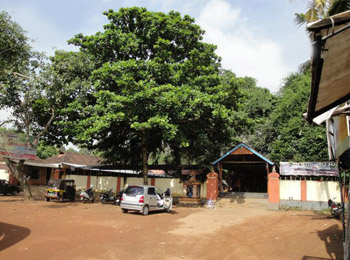 This is very famous among the other snake temple in Kerala. 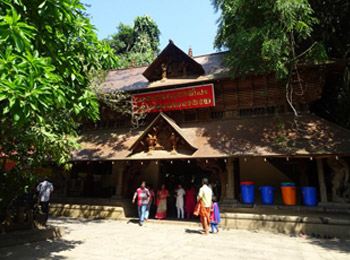 This is not a temple as such.  It is a house owned privately.  It is noteworthy that the pujas in the Nagaraja temple in Nagarcoil in Tamilnadu are followed only after the Tantrik principles prescribed by people of this house.  Pujas may be performed here for relief from Naga doshas.  The expenses would be in the range of Rs. 6,000 to Rs. 10,000.  Oil Prasad is offered at the end.  Besides Naga puja, worship of Bhagavati and Badrakali is also followed. 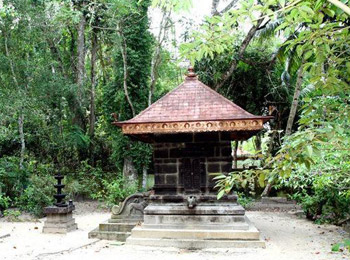 Nagaraja and Nagayakshi are in idol forms in a big house surrounded by tress and bushes. 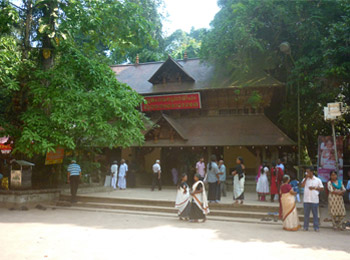 A Namboodri in Mekkadu worshipped Lord Shiva for 12 years seeking freedom from poverty. Once, he went to the tank to fetch water the light appeared and turned into a divine form that looked prosperous and held a precious stone in its hand. The Namboodri asked a series of questions about the identity of the form. The form replied angrily that it did not concern him and asked him to turn back with water. The Namboodri politely asked the form to give him the glittering stone which he wanted to show to a Thambiran known to him. The divine form agreed on the condition that the stone should be returned after showing it to the Tambiran. The Tambiran saw the stone and was unwilling to part with it, but the Namboodri insisted. He came to the tank and returned the stone to the divine form. The form then disappeared along with the bright light. The Namboodri could not understand who or what the form was. There were just three days remaining to complete his 12-year worship of Lord Shiva. When he came to the tank for fetching water, he was delighted to see the divine form again. He understood that it was a divine power and fell at its feet seeking its identity as Lord Shiva. On hearing the name of Lord Shiva, the form responded that its name was Vasuki and added that the Namboodri could only see the light but not its real form. The Namboodri insisted. When the divine light revealed its true form, the Namboodri fainted because it was a five - headed snake which he had never seen before. When he regained consciousness, the form appreciated his devotion to Lord Shiva and asked him what he wanted. Namboodri requested for freedom from poverty.

The form blessed the Namboodri with the precious stone and directed him to return home after three days and said, "My blessings will ever be in your house. Naga Yakshi also will come to join you. Install us in the house and light two lamps which should always be lit. Keep the surroundings convenient for the habitation of snakes with trees, bushes, etc. There should be no lighting of fire anywhere in the house except in the kitchen. You should not cut the trees or dig the ground to clean the bushes. Your family should harass the snakes. If they bite, you should take treatment immediately failing which the snake will die and not the bitten. Yet, you should not be responsible for the death of the snake". Before the Namboodri reached home, an aged man of the family removed his turban made of palm leaves when a snake emerged from it. The Namboodri made two idols, Nagaraja and Nagayakshi from the turban. The Namboodri family has been performing the poojas since then for respite from Naga Doshas.

For 41 days from day one of Karthikai month (November-December) and during the first seven days of Aavani month (August-September) all people are allowed near the temple on some conditions. On other days, admissions are strictly with the prior permission only. One Jadaveda Namboodri is in charge of the temple conducting the pujas. Pujas are performed in morning only.