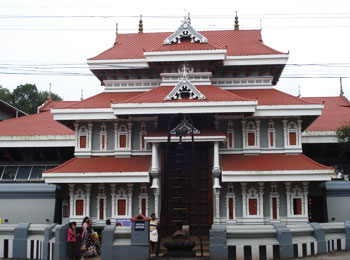 Thiruvambadi Krishna temple is one of the popular temples of Thrissur city. Thiruvambadi temple was earlier situated in a rural village called Edakkalathoor, located 20 Kms away in the north west direction of Trichur Town. The name of the temple suggests the importance of Lord Krishna. The local administrator of that particular area was a respected gentleman referred to as "Moose". In the 16th century, a girl belonging to the Moose family fell in love with a young man of another religious belief. This created a lot of tension amongst the villagers. Conflicts between these sects became an everyday spectacle. Some of the villagers, foreseeing communal riots, decided to safeguard the idols of the temple from being destroyed. They detached the idol of Lord Krishna from the Sanctum Sanctorum and went to Thrissur. They reached "Kandanathu Mana" (also renowned as Kachanappilli Mana) and sought help. At that time only a couple were residing there and they were sorrowful because they didn't have children. When they saw the idol of Lord Sri Krishna they took Him as their child and consecrated the idol in a hall within the premises. The couple were worshippers of the Goddess Kodungaloor Bhagavathi (Goddess Devi in Kodungaloor temple). Once while they were leaving the Kodungaloor Temple after their visit, tears rolled down their cheeks, because they believed that they would not be able to visit the temple again owing to the ill health of the Nambudiri. On reaching the Mana, the Namboodiri placed an "Olakkuda" (an umbrella made of palm leaves) in the nadumuttam (a vacant place surrounded by rooms called "nalukettu"). Later he realized that the 'Spirit' of the Devi has accompanied him on the Olakkuda. He shifted the 'spirit' onto a pillar of that nadumuttam and started worshiping Devi. Astrologers advised the Namboodiri to consecrate Bhagavathi on the left side of the sanctum of Lord Krishna. They did so and since the couple didn't have children, they transferred the ownership of the temple to the public. All decisions regarding the temple affairs were taken by a group of local people.