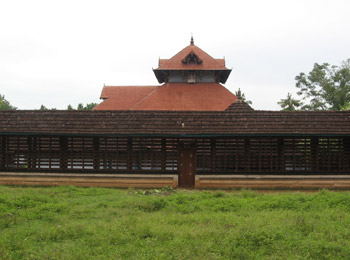 Annamanada Mahadeva Temple is located at Annamanada in Thrissur District, Kerala. Annamanada Mahadeva Temple is one among the 108 Shivalayas created by Parasurama. In the Shivalaya nama stotra it is mentioned as Koratty Temple. Annamanada is a small town in the southwest corner of Thrissur district. It is situated 8 km from Mala and 10 km south of Chalakudy. The name Annamanada came from some Brahmin families (Manas) where Brahmins used to get free food (Annam) in older days. The village where food (Annam) serving Brahmin families (manas) situated, later known as Annamanada. 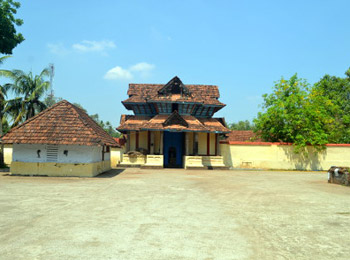 Annamanada Mahadeva temple is located near the bank of Chalakudi River. The temple faces east. Main road access to the temple is on the western side. Entering through the east nata one comes across an astonishingly low Valiabalikkal just in front of the agramandapam. Past the balikkal and agra mandapa one enters the inner courtyard (akathe balivattom) of the temple. There is no namaskara mandapa in front of the Shrikovil. The Sopana with carved hasti-hasta bannisters on either side provides access to the square mukha mandapa. The sanctum is also square in shape. Both the Shrikovil and mukha mandapa are built up of granite up to the vedika. Further up, the shrikovil is built up of laterite, plastered over and decorated with panjaras and plain rectangular vertical niches interspersed in between. The ghanadvaras (false doors) on the south and west are utilised for the pratishtas of Ganapathy and Parvathy respectively. They are adorned with toranas. Underneath the ghanadvara on the north runs the granite pranala supported on a dwarf figurine. The sanctum contains the Shiva linga, almost four feet tall and is considered to be Kiratamoorthy in a pleasing mood while giving Pashupatastra to Arjuna. The mukha mandapa in front is enclosed on the three sides with horizontal wooden slats fixed on outwardly sloping carved wooden frames. The upper floor walls of the mukha mandapa are made up of intricately carved wood panelling. There are two thidappallies forming part of the naalambalam on either side of the main sanctum. Through a door on the northern side of the naalambalam, opposite the pranala one comes to an enclosure which contains the circular eka-tala shrikovil of Vishnu with a square namaskara mandapa in front supporting a pyramidal roof. Both the structures have tiled roof. The vilakkumaadom structure encloses the naalambalam of Shiva sannidhanam as well as the Vishnu enclosure on its northern side, along the outer periphery. The independent gabled roofs of the two valiambalams, that of Shiva and Vishnu, present independent mukhappus (frontage) of the two major sannidhis, while that of Shiva extends forward over the agra mandapa in front accentuating its primacy. Outside the eastern dvaragopura on its south is situated the Mahakaali sannidhi and on the north-east are the sannidhis of Nagaraja, Durga mounted on lion, Narasimha and Krishna with a large tank in between. The Annamanata river flows by facing the eastern facade at a distance of around 500 metres, wherein the aarattu of the Lord takes place on the concluding day of the annual festival. The devaswom office is located on the west nata beyond the dvaragopuram on the north-west side. The main access to the temple is from the western side and the distance to the road point (Chalakkudy-Mala bus route) is about 200 metres.

The presiding deity of the temple is Lord Shiva. The shivling is almost four feet tall and is considered as the Kiratamoorthy in a pleasing mood while giving Pashupatastra to Arjuna. This temple is special for its deity positioning. Lord Shiva and Sree Sree Parvathy sit face to face here on same platform.

Being one of the thirty two grama kshetras in the Kerala coast, the nucleus of the temple can be dated to an antiquity of at least 1200 years. Earlier the temple was being administered by about 10 or 12 mamboothiri illams who were the traditional uraymas of the temple. Subsequently, by the middle of the eighteenth century, the melkoyma (overlordship) was usurped by the Zamorin of Kozhikode. Cochin (in whose territory the temple was situated) successfully colluded with Travancore to oust the Zamorin from the over lordship of the temple. The namboothiris of the gramasanketham who did not relish the overall administration of Cochin, surrendered the melkoyma rights of the temple to the Travancore ruler. Travancore claimed and exercised sovereignty over the temple for about a century. Cochin ruler approached the British East India Company to mediate in their dispute with Travancore regarding melkoyma of the temple. By 1814-15 the East India Company who were meddling with the affairs of the princely states ruled that Cochin had sovereign rights over the Adoor Grama and the Annamanada temple, but certain rights of the temple were conceded to Travancore state. Later, considering the difficulty of exercising those special rights in a foreign territory, Travancore conceded those rights as well to the Cochin ruler in 1902. Now the temple is being administered by the Cochin Devaswom Board.

The annual festival is celebrated during Kumbham (February or March). The festival lasts for ten days and is observed with pomp and pageantry. People from surrounding villages gather here for worshipping lord Shiva and Parvathy. Laksha deepam (one lack chirags) on sixth day is very famous. The Thiruvathira arattu on the concluding day of the annual festival is done in the Annamanada River. Tantries or chief priests are from Kuttalakkatt and Avanaparambu Nampoothiri illams. Annamanata Mahadeva Temple is a Mahakshetra by all criteria, though less popular and known outside Thrissur district. It has all the constituent units of a Mahakshetra. Five poojas and three shribalis constitute the daily pooja routine. Pradosham, Shivarathri and Ardra (particularly in Dhanu) days are of special significance.

The nearest airport is in Nedumbassery. The nearest railway station is in Chalakudi and Koratty. The region is well connected by bus and road.