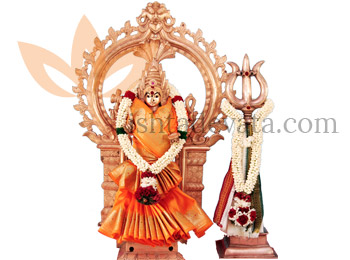 Sri Mariamman Temple is dedicated to Goddess Shakti. It is located in the city of Udumalpet, Coimbatore District, Tamil Nadu and is about 500 years old.

The main deity, Mariamman is made of sand and clay like many of the traditional Mariamman deities, and hence unlike many other Hindu deities there are no abhishekams (sacred washing) conducted to the main deity, but instead the "abishekam" is done to the small stone statue in front of it.

Mariamman is invoked three times a year to regenerate village soil and protect the community against disease and death. Other places may have an important Mariamman festival. Mariamman is not a peaceful and benign goddess.

She can be vindictive, inexorable, and difficult to propitiate. Essentially she is a personification of the world's natural forces, but specifically she is a goddess of smallpox, chickenpox, and other diseases. Her role is ambivalent for she both inflicts the diseases and protects the village from them.

The onset of disease or disaster causes special worship or a festival of the goddess, for they are caused by demons let in because the goddess's defences have broken down or because the goddess is angry at being neglected. Mariamman reminds people that their ordered world can be shattered at any time and worshipping her makes one's view of reality less fragile.

Mariamman is especially favourable at this time to those suffering from the disease, for they are helping her bear the burden of the demonic attack. Blood offerings of animals are commonly sacrificed at festivals of Mariamman, but this is not invariably the case.

One story about the origin of Maariamman is she was the wife of Thiruvalluvar, the Tamil poet, who was an outcast.She caught smallpox and begged from house to house for food, fanning herself with leaves of the neem or margosa tree to keep the flies off her sores. She recovered and people worshiped her as the goddess of smallpox. To keep smallpox away, neem leaves are hung above the main entryways of South Indian homes. This temple houses both Thiruvalluvar and his wife Vaasuki Ammaiyar. This is in sharp contrast to the life of Thiruvalluvar where in he advocated love for all. Hence this story cannot be taken to be credible.

The Tamil word Muthu means pearl and hence in the ancient usage of the language 'Muthu Maari' was a celebrating, poetic way of telling the rain falls in droplets which were related to pearls given by the nature god for property. Maariamman was also called 'Muthu Maariamman' which meant the goddess who gives prosperous rain. This was wrongly connected to the pearl-like small form of the boils that occur during chickenpox.

Another story involves the beautiful virtuous Nagavali, wife of Piruhu, one of the nine Rishis. One day the Rishi was away and the Trimurti came to see if her famed beauty and virtue was true. Nagavali did not know them and, resenting their intrusion, turned them into little children. The gods were offended and cursed her, so her beauty faded and her face became marked like smallpox. The Rishi returned, found her disfigured, and drove her away, declaring she would be born a demon in the next world and cause the spread of a disease which would make people like her. She was called Mari, meaning 'changed.'

Local goddesses such as Mariamman who were believed to protect villages and their lands and represent the different castes of their worshippers have always been an important part of the religious landscape of South India. However, we can note periods of special significance. The eclecticism of the Vijayanagar period (1336–1565) encouraged folk religion, which became more important and influenced the more literate forms of religion. In the last century and a half there has been a rebirth of Tamil self-consciousness (see Devotion to Murugan). In the middle of the present century deities such as Mariamman have become linked to the "great tradition" as the strata of society which worship the goddess has become integrated into the larger social order.

The nearest airport is at Coimbatore.

The Nearest Railway Station is at Udumalpet.

Udumalaipettai is well connected to other major cities of the country via regular buses.