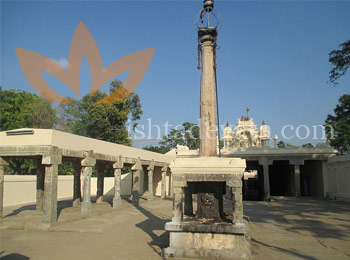 There are three sculptures in front of the temple depicting Sundarar in three moods representing his sadness in losing the possessions and the happiness while getting them back. There is also a hall in the outer corridor-prakara called Adalvallan Sabha where the Lord played the Brahmma Tandava dance. There are three springs in the temple, the Shanmuga theertham, Gnana theertham to its left and Brahmma theertham to its right. A Pandya king Maharadhan by name having no progeny, had a dip in the Shanmuga theertham and prepared porridge (payasam in Tamil) with its water with cow milk and sugarcandy and offered it to the Lord as nivedhana. He also gave it to the Brahmins. He was blessed with twins. There is also a shrine southeast of this place for Lord’s consort bearing the name Neelandi facing north with eight hands blessing all as a guardian deity.


Lord Shiva graces in the temple as Swayambumurthi. The Goddess name is Avudainayaki /Mangalambikai. Presiding deity Lord Tirumuruganathar is so named as He was installed and worshipped by Lord Muruga. Substantiating this story, the Muruga shrine facing south, has a Linga facing west in the sanctum sanctorum. While coming to worship Lord Shiva, Sri Muruga left His Vel weapon and the peacock vehicle outside the temple. As such, Lord Muruga in the shrine does not hold Vel and there is no peacock by Him.


Of the 12 Tirumurais of Saivite hymns, the seventh belongs to Sundarar who was a close friend of Lord Shiva in Kailash. His Bhakti relation with Lord Shiva comes under the Saka Marga category. He enjoys the right of even arguing with the Lord. He came to Earth for a different reason. Sundarar, with his poetic excellence, got huge gifts from king Cheraman Perumal Nayanar, also a renowned Shiva devotee occupying a place among the 63 celebrated Nayanmars. During his journey, as night was nearing, he took rest in front of a Vinayaka temple. He did not think of Lord Shiva. The Lord sent his Boodhaganas (the army of Lord Shiva) in the guise of hunters and got all the valuable gifts robbed from Sundarar. Sundarar prayed to Vinayaka to help him recover the wealth of gifts. Merciful Vinayaka showed him a temple eastward. Sundarar found Shiva and sang such hymns blaming the Lord for not protecting him from the hunters and demanding his immediate action to get back the lost properties. Lord Shiva, enjoying the hard reading of the song, responded to Sundarar’s demand prayer. Thus, Tirumuruganpoondi has become the place where the Lord staged His play (Tiruvilayadal).


The main festival of the temple is the 13 day celebrations in the month of Masi (February-March) and Maha Shivrathri in the same month. Tirukarthikai in November-December, Arudra Darshan in December-January, Annabishekam and Skanda Sashti in October-November, Thaipoosam in January-February, Navarathri in September-October, and Vaikasi Visakam in May-June are the festivals celebrated in the temple.


Devotees carry milk pots and Kavadi and perform special abisheks to the Lord to realize their prayers.


Praying to Lord Shiva sincerely after a dip in the Brahmma theertham assures the devotee a total cure from mental diseases, curses and sins. Devotees install Naga (snake) on the banks of the holy spring. Performing abishek to the Lord after a dip in the Shanmuga theertham spring ensures child boon, is the belief.