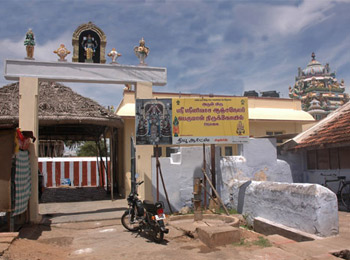 As the temple is facing North, the direction belonging to Kubera the Lord of Wealth, people worship here for prosperity. As Lord Perumal and Sri Anjaneya are together, Lord is named Sri Srinivasa Anjaneya Perumal. Acharya Sri Madhva and Sri Raghavendra are also with Perumal. As Lord is holding Mother Mahalakshmi in His chest, there is no separate Shrine for Mother. Rice coated with turmeric is offered as Prasad.

2.5 feet tall presiding deity is young in appearance in a standing form. Sri Anjaneya is near the Lord in a worshipping form. Though Sri Anjaneya has a separate shrine in Vishnu temples, He is with Lord Himself in the sanctum sanctorum itself in this temple.

Many years ago, a Vishnu devotee was worshipping Tirupathi Lord for a child. One day, he appealed to Sri Anjaneya to take his appeal to Lord. Sri Anjaneya appeared in his dream and said that there was a Perumal idol near an anthill uncared for and advised him to find the idol and build a temple for Perumal to realize his wish. The devotee obediently followed the advice and also installed Sri Anjaneya near the Lord.

Chitra Poornima in April-May, Hanuman Jayanthi, Vijayadasami in September-October and Vaikunda Ekadasi in December-January are the festivals of the temple

Devotees pray for child boon, wedding, relief from adverse planetary effects and recovery of things stolen from them.

The nearest airport is Coimbatore Airport.

The temple is at a central place of Udumalpet town which is 69 km far from Coimbatore and 35 km far from Palani.