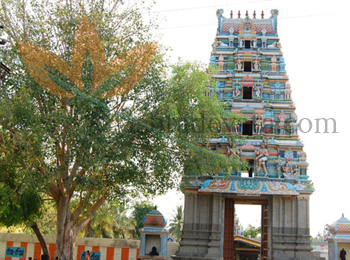 This temple is located in Venjamangudalur near Karur, this temple is classified as one of the Kongu Naattu temples. Karuvoor Aanilai is another Shivasthalam located nearby. The sanctum of this temple bears depictions of the 7 Thevara temples in Kongu Naadu. Lord Vigirtheeswarar graces with his snake jewel (Nagabaranam) in the sanctum sanctorum as a swayambumurthy. 6 Road Pirivu is 13 km far from Karur on the Aravakurichi route. From this place, the temple is 8 km far. To reach this temple, one has to travel south-west 16 km from Karur on the way to Aravankurichi till Thalapatti. Then go in a branch road about 10 km to reach "Venjamangudalur". The temple is located on the east bank of river Kudaganaaru. Sundarar composed the Thevara Pathigam here. Arunagirinathar has also visited temple. Saint Arunagirinathar has sung a poem on Murugar of this temple in his Thirupugazh.

This Shiva temple is over 1200 years old. This temple has a 5 tiered Rajagopuram. The presiding deity lord Shiva is called as Vikriteswarar and the Ambal his consort is called as Vikritambika. Both the Shiva and the Ambal shrines face east. The main Lingam inside the sanctum sanctorum is 5 feet in height and the female deity's image is 2.5 feet in height. This Shivasthalam has been patronized by the kings of Pandiya Naadu and many rock cut inscriptions of Pandiya Period have been found in this temple. There are shrines to the Panchalingams, Bhairavar, the 63 Nayanmars and others in this temple. The Theertham is Vikrita Theertham.The current temple is the result of extensive rebuilding work carried out in the 1980s. The sanctum also bears depictions of the 7 Thevara Sthalams in Kongu Naadu. Arunagirinathar has also visited here. The exit in the temple is so arranged with steps indicating that the devotee will be stepping up in life after his/her prayer here. As the two rivers – Kudaganaaru and Manimutharu meet here, the place is named Koodal Oor – confluence.

Vigirtheeswarar means Lord who grants us all that is good. Devotees get their sins washed off by worshipping Lord Shiva here. Mother Panner Mozhi Ammai – Mother with a sweet musical voice – graces from a separate shrine. There are also shrines for Nalvar and 63 Nayanmars and Panchalingas. Lord Muruga graces from a separate shrine with six faces and with his consorts Valli and Deivanai. He is praised by Saint Arunagiri in his Thirupugazh hymns. It is believed that worshipping Lord Muruga here will result in the re-union of couples separated earlier for some reason or other.

Legend has it that a hunter king by name Venchan is said to have worshipped Shiva here and hence the name Venchamaakoodal. Shiva is said to have appeared in the guise of an old priest and blessed Sundarar with gold. Saint Sundarar came to this place on a pilgrimage. By that time, he had spent all the money (gold in those days) and asked Lord Shiva to give him gold. Lord said that he had nothing with him to help Sundarar. Saint Sundarar said that the Lord cannot be without money and pressed his demand. Lord said that he would have to pledge something to give money to Sundarar. The saint simply said that he did not care about his problem and stuck to the demand. Lord Shiva made Mother Parvathi an old lady. When she came, Lord gave Vinayaka and Muruga to her and asked cash and fulfilled Sundarar’s need. The story emphasizes that how Lord was kind to his friend devotee (Thambiran Thozhar in Tamil) and set a model for good friendship. It is common belief that praying in this temple will perpetuate relationships Devotees will be blessed with good friends. Indira, king of Devas developed a desire on Akalika, wife of Maharshi Gautama. He entered into his hermitage in the guise of a cock and cried. Cock cry indicates the dawn. Innocent Maharshi left the hermitage for the river to have his morning bath. Indira entered into the hermitage as Rishi. Akalya thought the entrant was her own husband. Meantime, the sage, finding that there was more time for the dawn and returned home sensing some mischief.

Seeing the Rishi, Indira, tried to escape in the guise of cat. But he was cursed to have eyes in his whole body. Indira began to go round the Shiva Temples seeking relief from the curse. Lord Shiva said that his curse would disappear at an appropriate time. Indira begged the Lord that he should grace His darshan to all from this place. Lord Shiva appeared here as Swayambu Linga.

People approach this temple for their wishes to be realized; devotees perform abisheka to Lord and Mother with milk and conduct wedding festival.

Those facing problems in wedding proposals and seeking child boon pray to the Lord. More particularly, those facing the wrath of women are more among the devotees.

The nearest airport is Tiruchirapalli International Airport located at a distance of 77 km from the town. After reaching Tiruchirapalli travel up to Karur. Then travel up to Venjamankoodalur by Buses and Taxis to visit this temple. The nearest railway station to Venjamangudalur is Karur Railway Station which is 14miles away. From here one can reach the temple by buses and private auto-rickshaws. Buses are available to reach Vigirtheeswarar temple from Karur bus stand which is 22km away.