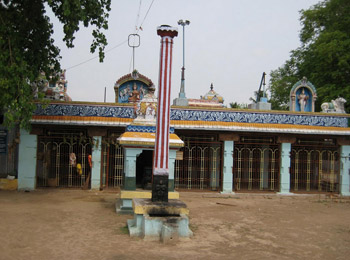 Mahalakshmi Amman Temple, Mahadhanapuram, Krishnarayapuram Taluk, Karur District was built by Vijayanagara Emperor Sri Krishnadevaraya (1509–1529) on the banks of river Cauvery. This temple is about 800 years old. This temple is in a remote village and very few vehicles ply on the road. The Motorable road is well canopied on either side by coconut trees. 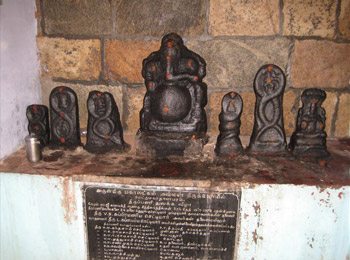 The presiding deity Mahalakshmi of this shrine is being worshiped as the family deity by Kannada speaking Kurumba community people, (shepherds by occupation) and certain sections (Mummudiyar Gotra) of the 24 Manai Telugu Chettiars. However the shrine is attracting all Hindus belonging to all communities.

Goddess Mahalakshmi is truly a goddess of wealth and protection in this temple there is a beautiful statue of Goddess Mahalakshmi. She looks so beautiful and divine. We can really feel her caring eyes on us when we stand in front of her. The Sanctum sanctorum of Amman temple is east facing and the temple has three prakaram or corridors and you will find many more shrines devoted to parivara devtas.

Sometime back, the villagers of the temple wanted to construct the compound wall around the temple. The marked place was cleaned and upon digging they found 187 numbers of coconut shaped stones. This event surprised the devotees and the stone coconuts are preserved and displayed in the glass case for devotees to witness.

The course of the railway will be changed if the villagers agree for one condition. They should demonstrate that if they could break these stones with their heads, they would change the course of the railway line. The villagers broke the stones and the same was broken into two halves. As a result the line was shifted towards northern side and now running 1.5f km away from the temple. 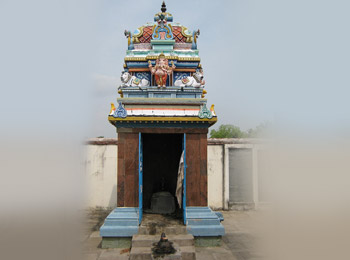 Once, a King by name Sivaperuman ruled over a small and happy kingdom called Perumizhalai region. Saivite Saint Kurumbar Nayanar (one of the 63 Nayanars) was serving the King. Kurumbar Nayanar has adopted Saivite Saint Sundaramurthy Nayanar as his Guru and was commanding respect from the public for his devotion to Lord Shiva. The name Kurumbar Nayanar has strong association to his shepherd community and was born on Chithirai star day in the Tamil month of Aadi (July August). He used to take sufficient food and other essentials packed in a woolen cloth and dispatch it from the border of the place.

The Kurumbas or shepherds were grazing sheep. The woolen fabric was made from the hairs of the sheep. Nayanar was simple in nature and was noted for austerity by all. He held Lord Shiva in his heart and led a life dedicated to the Lord. As he was ever chanting the hymns of Sundarar, the Tiruthonda Pathikam in particular – the 10 verses in praise of all the Nayanmars at the Tiruvarur Temple, Kurumbanayanar attained the great powers mentioned in our scriptures as Ashtamasiddhis. He was also ever chanting the Five Lettered Mantra called Panchakshara – Na Ma Si Va Ya.

When Kurumba Nayanar came to know that Lord Shiva decided to recall Sundaramurthy Nayanar, his Guru to Kailash, Kurumba Nayanar decided to reach Kailash before his Guru with the help of Yogas as he could not live on earth in the absence of the Guru. This episode is described in the great Tamil Epic Periyapuranam.

When Mahalakshmi ran away from him, he chased her up to Mettur Mahadanapuram where the Kurumbas were grazing their cattle. Mother Mahalakshmi hid herself in a hole. Incidentally, Ravana was performing penance there. On seeing Mahalakshmi, Ravana was afraid that she had come there to kill him and immediately left for Lanka. Andhakasura chose the Ravana’s place for hiding.

Mahalakshmi was consuming the milk of the sheep which the Kurumbas noticed with surprise. They dig a wet place and found Mahalakshmi as a Swayambu (self-manifested). She begged the people to protect her from the Demon to test their devotion which people also understood. They covered the Goddess in the woolen cloth. But the demon fought with them and also caught Lakshmi.

People prayed to Lord Shiva but he did not listen to their prayers and did not turn up. As the three-eyed Shiva did not turn up, the devotees chose the coconut also having three eyes as Shiva and began to break it on their heads. Pleased with their determined devotion, Lord Shiva appeared and protected Mahalakshmi.

The annual Aadi festival of Sri Mahalakshmi amman Temple at Mettu Mahadanapuram is being celebrated on ‘Adiperukku Day’ i.e, 18th day of the Aadi month and on the 19th day of Aadi month the a traditional annual ritual of chief priest breaking coconuts on heads of devotees as part of their fulfillment of vow will takes place. This will be the main part of the second day function of ‘Adiperukku’. Thousands of people from many parts of Tamil nadu, Kerala, Karnataka and Andhra Pradesh will participate in this annual ritual. The devotees will gather in front of the temple and a priest will smash a coconut each on every registered devotee’s head. Devotees collect the broken pieces of coconuts as a holy offering.

Devotees pray to Mother Mahalakshmi for removal of obstacles in marriage alliances and for child boon and achievements in education.

The nearest airport is in Coimbatore. The nearest railway station is at Erode. Bus facilities are conveniently available from Karur.