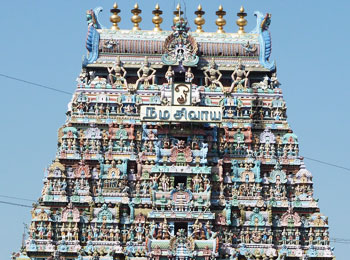 The Pasupatheeswarar Temple is situated in Karur and is one of the seven Shivastalams in Kongu Nadu. This city was called Karuvoor during the time of Sambandar visit to this temple. Sundarar and Sambandar composed Thevaram Pathigam in this temple. Lord of the temple is praised in the carols of Saints Thirugnana Sambandar, Karuvurar’s Thiruvisaipa and Arunagirinathar in his Thirupugazh. This is the ninth temple of Lord Shiva in the Kongunadu region praised in Thevaram hymns.

This is the most important temple among the seven Temple in the Kongu Region. Entering the temple, the stone-made Flag post-Kodimaram greets the devotee. On one side of the Kodimaram is the sculpture of King Pugazh Chola Nayanar with his hand holding a head on a plate. On the other side there is a sculpture of a cow licking the Shivalinga from its rear legs under its milk organs. The 100 pillar Mandapam is so-called Pugazh Chozhar Mandap. This is one of the five capitals of the Chola kings. Lords Nataraja and Dakshinamurthi are in the ghoshta wall. There is also a shrine for Lord in inner prakara and shrines for Mother Mahalakshmi and Lord Arumugam. There is a sculpture of Cow which is licking that Shiva Linga. Another specialty of this temple is it has got five Lingas. At this temple there are two dedicated Sannidhis for Goddess Devi. Karuvurar or Karvur Thevar, the famous Siddha who helped many Chola during their glorious ruling was born at this town. Pughazh Chola Nayanar ruled this area. Thirugnana Sampanthar sung about this temple. The idols of Eripatha Nayanar, Pugazh Chola, Sambandar and emperor Muchukunda (said to be a Chola king) are found at the corners of the enclosure around flagstaff. At the north-west corner of the outer prakaram is the Sannidhi for Shanmugha, who is seen with his consorts. Proceeding further on the northern side of the outer prakaram one can see Pancha Lingas.

The sprawling Kalyana mantapam is a fine piece of architecture. Its supporting pillars impart a sense of rhythm and symmetry. The original floor must have been replaced with dark spark tiles at some point of time during the Kumbabishekam, the last of which was held in 2006. The floor has been divided into three segments. The lower-most has the Dhwajasthambham, Bali Peetam and Nandi of a moderate size. The top-most segment leads to maha mantapam, ardha mantapam and garbhagriha. The ceiling is splashed with paintings of puranic lore. The lingam, which is said to be Swayambu, is five-ft tall. The highlight is the lingam is found tilted to the north. It is said that in order to enable Karuvur Thevar, one of the 18 Siddhars, merge with the effulgence of Siva, the Lord tilted himself. At the south-west corner of the outermost prakaram, there is a Sannidhi for him with an extended mantapam in front. His image in panchaloka is in ‘padmasana’ posture. Another phenomenon about this temple is that the sunlight falls on the lingam on the 14th, 15th and 16th day in the month of Panguni.

In the small prakaram around the garba griha the walls are adorned with the images of Vighneswara, Ardhanareeswara, Brahma and Durga. Saint Thiruganasambhandar, who has visited this temple, has sung in praise of the lord. Those songs have been catalogued under second Thirumurai. Out of the Saivite quartet, Sambandar alone has visited this temple. Saint Arunagirinathar has sung in praise of Shanmugha and this Sthalam in seven of his Thirupugazh pieces.

From the inscriptions so far deciphered, it is clear that the temple existed during the reign of the king Rajendra Chola (1012-54 A.D.) since he gifted away land to this temple. For the Kongu Cholas and Kongu Pandyas, the temple was a favourite and, it drew undivided attention of the Vijayanagar rulers too. Though the sthala Vriksham is said to be Vanji, only vilva trees are seen now. The temple celebrates a plethora of festivals, the car festival being the most popular. Panguni Uthiram is celebrated as Brahmotsavam.

The main deity in the temple shrine (Moolvar) is a Swayambulingam. He is called Pasupatheeswarar or Anilaiyappar or Kalyana Pasupatheeswarar. There are two images of Ambal here, Sundaravalli and Alangaravalli. The shrine of female deity Sundaravalli is facing south. Lord Brahmma worshipped Anilaiyappar as one in the Ant hill (Puttru in Tamil). Kamadhenu (divine cow) had worshipped the Lord here. During the worship, the feet of Kamadhenu touched the Lord’s head, the symbol of which is still on the Linga.

Legend says that Kamadhenu, the mythological cow, meditated upon Siva to receive his blessings and the name Aanilai. Brahma is said to have worshipped the presiding deity here. Thus the Sthala Theertham is called the Brahma Theertham. The old temple of Karur is at least 2000 years old. Six times pooja had been happening every day for several centuries now. This town used to be the capital of Chera Kings. Legend has it that Siva on sensing the conceit of Brahma as the creator of the world, sent Kamadhenu to Vanji forest in Karur to take up the duty of creation and instructed her to worship the Siva lingam hidden in an anthill at the forest. When Kamadhenu was performing the abishekam to the lingam with its milk, her hoof accidentally hit the lingam and injured it. The scar left on the lingam is seen on its back even now as a depression. Kamadhenu pleaded guilty. The Lord told her that he will be hailed as Pasupatheeswarar as she worshipped him at this place thus according a special status to Kamadhenu. Pleased with this, Kamadhenu continued the work of creation. Meanwhile, realizing his mistakes Brahma took up severe penance worshipping Lord Siva in order to get back his place in Satya loka. Pleased with his prayers, the Lord restored the power of creation back to Brahma and took Kamadhenu along with him. Later on a temple came to be built in that place. There is a Brahma theertham created by Brahma to the north of the river Amaravathy. Quite paradoxically, the presiding deity has two consorts, Alankara Valli (also known as Kripanayaki) and Soundara Nayaki and their sannidhis are found to the north of the presiding deity. There is an underpass from the Kalyana mantapam, to reach their shrines. While Alangaravalli is a symbol of ‘kriya sakti,’ Soundara Nayaki represents ‘itcha sakti.’ The Sannidhi of Alankara Valli with the Sri Chakram and the mount, lion, installed in front of her, faces east, and that of Soundara Nayaki south.

An interesting and authentic tale hangs around the second consort, Soundara Nayaki. It is said that Vadivudaiyal born to a wealthy village official in Appipalayam, at a distance of seven km to the west of Karur, was devoted to Pasupatheeswarar and was bent upon marrying him. She performed Siva puja daily by observing all religious injunctions. Her parents could not dissuade her. On the other hand, Pasupatheeswarar assured them in their dream that he would marry their daughter on the seventh day of Panguni Uthiram festival, which will be indicated through a floral shower over entire Appipalayam. Vadivudaiyal was meditating when the whole village witnessed the downpour, and a glowing garland bedecked her. She was taken to Pasupatheeswarar temple where she merged with the lord. Even to this date, the Utsava idol of Pasupatheeswarar is taken to Appipalayam, on the sixth day in the month of Panguni and returns on the seventh day with Soundara Nayaki.

Another noteworthy feature at this temple is the Navagrahas. There are separate niches for Surya and Chandra in the Kalyana mantapam. The eight-armed Kala Bhairavar in the same mantapam has been cast in a splendid way. At the outer prakarams are, the idols of 63 Nayanmars placed on a raised platform in a row. Out of them, Eripatha Nayanar was associated with this temple during the reign of Chola king, Pugazh Chola, and attained godly state for having killed the coronation elephant of the latter after it snatched the flower basket from an aged devotee of Siva, Sivakamiandar and trampled it. Pugazh Chola became a Nayanmar later.

The sun's rays falls on the lingam 3 days in a year during the Tamil month of Panguni (mid March to mid April). The annual Brahmotsavam is celebrated in the same month. Other festivals include the Eripaththa Nayanar utsavam, Navarathri in September, and Arudra Dharisanam in January. The 13 day Panguni Uthira festival in March-April; Margazhi pujas and Arudra darshan in December-February, also 13 days; monthly Pradosha pujas, Jupiter and Saturn transition days and New Moon days are the festivals celebrated in the temple drawing huge crowd.

Chithirai Festival begins with Flag Hoist and Car riding on the day of Hastha Nakshthra and ends in the day of Chithra Nakshathra with Holy bathing in the river at morning and dehoisting the flag the evening. During this Ten days of ceremony the Uthsavamoorthis (festive deities - Siva, Vishnu) will be taken out on different types of Vahanas for Dharsan.

The 18th day of Aadi Tamil Month is the day for Holy both in river Kaveri. During this function the Uthsavamoorthi will be taken to the river bank and there will be a function called "Deepam" conducted by Thirukoil, at 6.00 P.M. The Last Friday of the Aadi Month is the day of making Decorations to all deities with sandal powder.

Aswini Nakshathra of Aipasi Tamil Month is the day of Annabishekam (Abishekam with cooked rice) to Lord Magudeshwara and Sasti Festival of six days duration which ends with the Soora Samhara. The Seventh day function is the Marriage Ceremony of Lord Muruga with Valli, Devasena.

Krithika Nakshathra day of Karthigai Tamil Month is the day of "Karthikai Deepam" (Day of light). The last Monday of these months is the day for the "108 Shankabishekam" (conches filled with Kaveri water).

Tiruvadhirai Nakshatra day of Margazhi Tamil Month is the day for Lord Nataraja; Nataraja abishekam is a process of specialized pooja for the dancing Sivaperuman. Procession, Festive deities will be taken out for the public Dharshan. The "Ekadhasi" is the day of entering in the Gateway to reach "Vaikuntham" (Heaven of Mahavishnu). This function is followed by the procession of "Uthsavamoorthis".

Pushpa Nakshathra of Thai Tamil Month is the day of "Theerthavizha"

Mahasivarathri is a grand saivaite festival to receive the blessings and bliss from the Supreme Diving grace Sivaperuman.

Uthra Nakshathra day of this Panguni Tamil Month is the day of worshiping Lord Muruga.

The Five Kaala Poojas are conducted according to the Kaarana Nagama Pooja system.

This Two Kaala Poojas are conducted according to the Pancharathra Aagamma Pooja system.

Lord Shiva as a Linga slightly leaning is a swayambumurthy on a square Avudaiyar-seat. The rays of Sun fall on the Lord for five days in the month of Masi-February-March.

Devotees pray in the temple for various wishes. They pray for mental peace, child and wedding boon, employment opportunity, progress in trade, promotions etc. It is believed that Lord Pasupatheeswarar does not disappoint his devotees.

The nearest airport is at Coimbatore. There is also a railway station at Karur on the Erode -Tiruchi section of the Southern Railway, and it is about 70 km from Erode and 75 km from Tiruchi. This Shivasthalam is situated 79 miles (127 km) by road from Coimbatore.