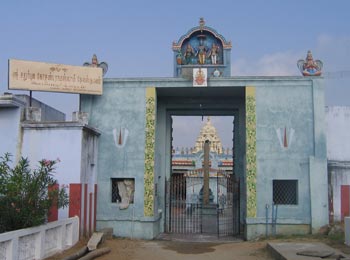 The Chaturpuja Kodandaramar Temple is situated at the Kalathur village in the Kancheepuram district of Tamil Nadu, India. This ancient shrine is primarily dedicated to Lord Sri Rama. The temple’s sanctum sanctorum has a Pushpaka Vimana (Lotus tower) over it. The temple also houses various other deities such as Lakshminarayana, Vishvaksenar, Nammazhwar, Tirumangai Azhwar, Sri Ramanujar and Mahadesikar in the front Mandapa (hall).

Lord Sri Rama graces here along with his divine consort Devi Sita to his left while Lakshmana, his brother is seen in his right side. Anjaneya appears kneeling in front of the lord, which denotes his devotion and sincerity toward Lord Sri Ram. Since Lord Sri Ram is an Avathar (incarnation) of Sri Maha Vishnu, Goddess Lakshmi Devi is seen residing on his chest. The festival of Makara Sankranti (Thai Pongal) is considered very special in this temple, since that is when Lord Sri Ram goes for the Pari vettai (It is to be noted that Lord Rama is a descendent of Surya, the Sun God). The vigraha of the Utsava moorthi (procession deity) is perfectly crafted that even the fine finger lines (rekhas) and nails of the Lord are clearly visible. The deity’s left leg is seen forward representing the bow-bending episode in Mithila when the Lord held the bow pressing it with his left leg. This particular form of Lord Sri Rama sis a rarity. Once there was a Darmadhishta who is said to have suffered from a unknown skin disease, as a result of a curse. On worshipping Lord Rama here, the man is believed to have got cured of the disease. From then on, this deity is well known to relieve those who offer prayers to him with a Tulsi garland and sugar candy.

The benevolent Lord Sri Rama is said to have graced Mother Kausalya, Sri Anjaneya, Thrijada (the lady who was Devi Sita’s during her captivity in Lanka) and Mandodhari (Ravana’s wife) as Lord Mahavishnu with four hands, holding the sacred conch and discus. Sage Devaraja wished to have a similar darshan of the Lord and hence worshiped him sincerely. The kind Lord is said to have yield to the prayers of the Maharishi at this holy place. Later a temple was raised at this place in memory of this divine event and the deity here got to be called Sri Chaturpuja Kodandaramar (Rama with four hands).

Sri Rama Navami which usually falls in the month of Panguni (March-April) is the most important festival in this temple. Special occasions like the Panguni Uthiram and Thirukarthikai are the other festivals celebrated here.

The nearest Airport to this place is the Chennai International airport (MAA).

The nearest loatec Railway station is the Kancheepuram Railway Station.

The temple is situated at Ponpadharkoodam which is about 13 kms from Kancheepuram. Very few buses are only available to this place and also at specific hours only.