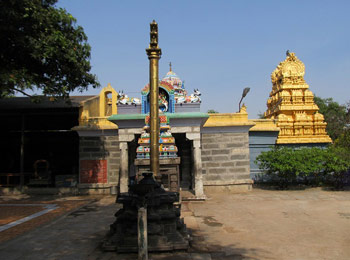 The Dakshinamoorthy temple is in Govindavadi and is dedicated to God Dakshinamoorthy. The presiding deity of this temple has exemplary powers. Idols of Akhilandeswari, Chandana Kunkuma Govinda are also seen here.

Lord Dakshinamurthy is seated on a peeta held by Koorma (tortoise), eight elephants, five serpents, a lion and deities of the eight directions. As He granted darshan to Lord Vishnu privately, the banyan tree is not here but a structure (mandap) representing Mount Kailash. Muyalagan the symbol of ignorance usually under the feet of Lord facing right is facing left in this temple. Vibuti Kavadi usually attributed to Lord Shiva worship, is carried for Lord Dakshinamurthy in this temple. The sacred ash is used for abishek and given as Prasad to devotees. Devotees dissolve it in water and consume as medicine.

The symbol in the forehead of Lord Vishnu is called Namam. This is done with sand called Tiruman. Here Kumkum and Sandal is used for this dressing-Alankara to show Vishnu was a Shiva devotee. Baghwan Adhi Sankara has a shrine in the temple remembering his visit. Serpent deities, Rahu and Ketu – also serpent planets – are in a single shrine in the prakara. Those facing adverse serpent planet effects perform milk abishek here for relief.

While on a war to protect His devotee, Lord Vishnu’s discuss slipped down and fell on Maharshi Thatheesi and lost its sharpness. Lord was discussing with Devas how to get back the ‘discuss’ with its full power. He came to the conclusion that the weapon could be repaired and got back with the blessings of Lord Shiva. For Shiva worship, initiation is necessary by a learned Guru.

Lord Vishnu came here with His consorts Sridevi and Bhoodevi, had a bath in a holy spring here and began penance. Lord Shiva appeared before Vishnu, taught Shiva Mantras and initiated for the pujas. Lord Shiva also told his disciple to worship Him with 1000 flowers in the place nearby called Tirumalpur in His Linga form and assured that the discuss would come back to Him fully powered at an appropriate time. Lord Vishnu, after the Shiva worship, got back His discus. As Lord Shiva appeared before Vishnu as Guru, He is worshipped here as Lord Dakshinamurthy.

Guru Puja in Chithirai (April-May), Jupiter transit days and Mahasivarathri Sangabishekam in Masi (February-March) are devotionally celebrated in the temple.

How To Reach Dakshinamurthy Temple

Govindavadi is 18 km from Kancheepuram on the Tiruthani Road. The devotee has to get down at Agaram bus stop and hire an auto. Buses from Chennai to Kancheepuram via Arakonam pass through this place. The nearest Railway Station is Tiruthani and Arakonam. The Nearest Airport is Chennai airport.