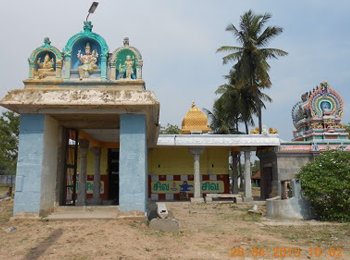 On His march to destroy the demons to protect the Devas, Lord Shiva passed through this place, once a forest of dense Jasmine trees. Lord Vinayaka broke the axis of Lord’s chariot as He passed without worshipping Him. Lord Vishnu held the car from falling down. The kondrai garland on Shiva’s neck fell down and became a swayambulinga. Saint Tirugnanasambandar was returning through this way after visiting Shiva temples. Lord Shiva in the guise of an old man asked the saint to sing the praise of Lord who was in that place, but the saint could not see and returned. Lord again intercepted the saint in the form a cow, showed the place and insisted His demand. Saint was too happy and sang in praise of the Lord. Arambas-virgins of the celestial world, prayed to Lord to help them keep their alluring beauty perennially. Lord appeared before them as Yoga Dakshinamurthy and granted their boon. Prayer to Lord Yoga Dakshinamurthy will grace the devotee an enticing personality, it is believed. Lord Shiva, worshipped by the virgins is gracing us near the entrance of the temple facing west ensuring all the 16 benefits as education, prosperity, courage, success etc. – 16 Peru in Tamil.

Lord Shiva here is named Deiva Nayaka Easwarar after the event of his assuming the Commandership of the Deva forces against the demons. He is also praised as Arambeswarar as He graced the Aramba women belonging to the celestial world. The place was named after this event as Arambayankattoor that changed as Ilumbiyankattor in the days that followed. Moon-Chandra worshipped Lord Shiva aftr a dip in the Mallika Pushkarini theertha and got relieved from the curse of Daksha. It is firmly believed that the soul would be totally relieved from the cycle of births and deaths, if one bathes in the Mallika Pushkarini Theertha.

Guru (Jupiter) transit days, Maha Shivrathri in February-March, Arudra Darshan in December-January and Tirukarthikai in November-December is the festivals celebrated in the temple.

Buses are available from Poonamallee in Chennai to Perambakkam. The nearest railway station is in Kadambathur, and the nearest airport is in Chennai.