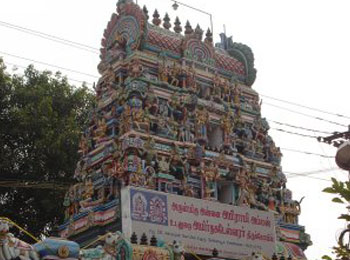 The west facing temple has a small tower. The main shrine houses Shiva Linga named as Amirdhagadeswarar. This shrine faces the east direction.The Goddess Abhirami is found in a separate north facing shrine. Both Amirdhagadeswarar and Abhirami have separate Nandi idols placed in front of their respective shrines. Usually, we don’t find Nandi in front of Goddess in Chennai region. The niche idols of Ganesha, Dakshinamurti, Vishnu, Brahma and Durga are found on the outer walls of the main shrine.

How to Reach Selaiyur

The nearest railway station is at Tambaram.

Selaiyur is well connected by buses and share-autos.