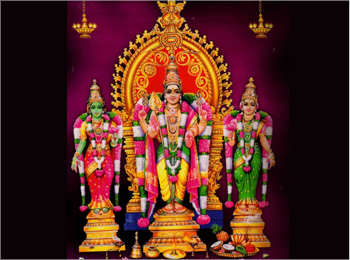 Kumara Kottam Murugan temple aka Shiva Subramanya temple is located in the busy and the densely populated area called Sowcarpet is one of such important temples of Chennai city.

The temple is called as the Vani Subramanyar temple by local people. It is referred to as Kumara Kottam of Chennai, is located at NSC Bose Road in Sowcarpet area of North Chennai. The temple is located at a distance of around 2 kms from Central Railway station. The Siva Subramanya temple is a small temple with Subramanya as the main deity who is found along with his two consorts – Valli and Devasena in the main shrine. One noticeable thing is that Valli in this temple has four arms, whereas the other consort of Lord – Devasena has just two hands. In front of the main shrine, you can find elephant instead of peacock. As per the belief goes, you can also find the idol of Agastya in the corridor of the temple. The idols of Ganesha, Nagaskanda, Dakshinamurthy, Vishnu, Durga, Narayani, Subramanya, two Chandikeswarars, Brahma are all found in the wall of the temple. There is separate shrine for palani and another for Muruga procession idol. The idols of Idumba and Kadamba are also found in this temple.