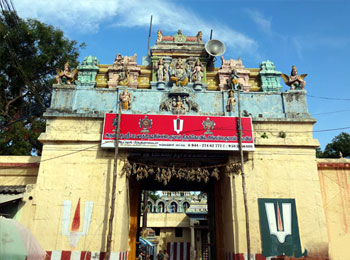 The Padalathri Temple is located in Singaperumalkoil, Kanchipuram district dedicated to Vishnu as Narasimhar and his consort Lakshmi as Ahobilavalli. The temple was built by the Pallavas during the 8th century. 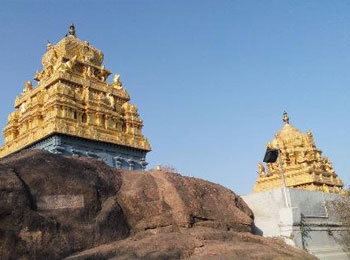 The presiding deity housed in the sanctum in a cave is a rock-cut image, in seated posture with his right leg bent and left leg left hanging Narasimha has four hands with two of the top hands holding his conch and Chakra, while the other two hands showing Abaya Mudra and Uru hasta (resting on his lap) Ugra Narasimha is sported with a third eye on his forehead, which is usually a feature of Shiva temples The sanctum is guarded by two Dvarapalas image on either sides The shrine of his consort, Ahobilavalli is located in the second precinct, which is believed to be a later addition There is a shrine of Andal located to the right of the sanctum While the two shrines of Ahobilavalli and Andal have precicnts, unlike the shrine of Narasimhar The temple is built in Rock-cut architecture, occupies around 1 5 acres (0 61 ha) and has two precincts. 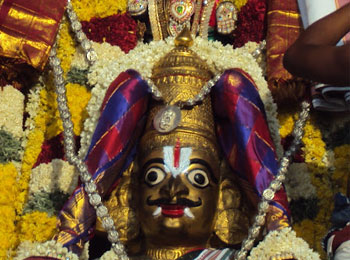 The main deity is seen here as Ugra (fierce) murthy, holding Paanchajanya (conch) and Sudharsana Chakra, showing Abhaya Hastha in one of His hands. Sri Narasimha Swamy here has 3 eyes and the third eye is shown by the priest while performing Haarathi. The Goddess here is Sri Ahobila Valli Thaayaar. There is a separate shrine for Lord Vishnu

Singaperumalkovil finds mention inBrahmanda Purana, which mentions that Vishnu appeared as Narasimha to the sages performing penance at this place after killing the demon king Hiranyakasipu Hiranyakasipu was troubling the Devas as he got a boon from Brahma that no human can kill him His son Prahlada was an ardent devotee of Vishnu, which Hiranyakasipu discouraged He also tried to slay Prahalad by various means, but was saved by the divine grace of Vishnu Vishnu took the avatar of Narasimha and appeared from a pillar Narasimha was a human with lion face and slayed Hiranyakasipu on an evening time in a doorway, which was neither land nor air His anger was not quenched een after slaying the demon king, but Prahalad sang and prayed Narasimha to calm down, which he acceded to He is also believed to have quenched his anger by bathing at the temple tank in this place The water turned is believed to have turned red after the incident.

The temple rituals are performed four times a day: Ushathkalam at 8 a m , Kalasanthi at 10:00 a m , Sayarakshai at 5:00 p m and Ardha Jamam at 8:00 p m Each ritual has three steps: alangaram (decoration), neivethanam (food offering) and deepa aradanai (waving of lamps) for both Narasimhar and his consort Ahobilavalli. There are weekly, monthly and fortnightly rituals performed in the temple.

Sooner their prayers are granted, devotees perform Tirumanjanam to the Lord on Pradosham days (13th day either from new moon or full moon day) and offer Vastras.

For relief from debt burden, success in litigations, those under adverse aspect of Mars affecting their marriage, those born of Swathi and Tiruvadirai stars, those undergoing Rahu Period (dragon’s tail) and those suffering from Saturn aspects pray to Lord Patalathri Narasimha for relief. There is a tree called Azhinjal behind the temple with powerful effects Those awaiting marriage, seeking child boon and excellence in education pray on this tree applying sandal and kumkum and light lamps with ghee.

The nearest airport is at Chennai. The nearest railway station is at Chengalpet Singaperumalkoil is 8 km from Chengalpat on the Chennai route. The temple is in the heart of the city.