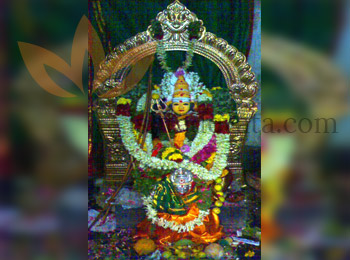 In Kongunadu, one can find Kali temples along with Shiva and Vishnu temples in the vicinity. This conglomeration in Kongunadu is a great example of its unity of divided Hinduism sects of Saivam, Vaishnavam and Saktham. Pariyur-amman temple is located in the midst of ever rolling green carpet fields. This beautiful location and the unending peace should be experienced than explained.

The Amman temple has a five storey main Gopuram at the South corner and an outer mandapam covering the inner sanctum made of black marble. There are intricate carvings on the pillars of the temple including a ball shaped of single stone inside the lion's mouth. The lion is considered the main vahana (vehicle) of the Goddess. The goddess facing north wears a crown of fire and is seen stamping a demon under her feet. Rudra is believed to be on the head of the Goddess. The temple also has shrines dedicated to Siddhi Vinayagar, Sri Pon Kaliamman and Kannimar.

There is a colossal statue of Sri Maha Muniappan, who is regarded as the savior against fear and evil apart from granting boons for bearing children. The divine ropes offered to Sri Maha Muniappan and Sri Kondathu Kali is considered to provide protection against evil and ill health. Apart from this, there are deities of Kaval Deivam (Guardian Deities), Brahma and other Gods/Goddess. Inside the temple, there are statues of Brammahi, Maheshwari, Gowmari, Vaishnavi, Mahendri and Chamundi. There is an urchavar statue normally referred to as 'Chinna Amman' which is the miniature of the main Goddess.

The history of the temple dates centuries back. The exact date of establishment is unknown and the current temple was built in the mid-1950s. The place was previously known as Azhagapuri or Parapuri and the name Pariyur came from 'Pari' 'oor' meaning, 'place ruled by Pari'. Vel Pari was a great king who is considered in Tamil literature as one of the Kadai ezhu vallal (literally meaning, the last of the seven great patrons). Arulmigu Kondathu Kaliamman is a powerful Goddess who was the deity responsible for the prosperity of the country ruled by Pari.

The existing temple was built around mid-50 of the 20th century. Hearsay reports cannot confirm the presence of a better temple in the immediate past. However, the numerous stone carved pillars and the fantastic art work cannot be ignored. The main Lion mount opposite the Goddess has a swirling stone ball in its mouth which cannot be taken out. How did it go in then? This is one of the better proof of the art work.

The temple is located on a South to North axis with the Goddess facing North. Rajagopuram lies at the South corner. On entering through the Rajagopuram, one would reach the Maha Ganapathy Saptha Kannigai and Pon Kaliamman temples. Next to these Devasthaanams is Kanavaala Ganathy. This Ganapathy is installed and maintained by the Kanavaala community people of Pudupalayam. Maha Muniappan is located on the North West corner of the temple.

The Maha Kundam, which is the remains of the Kundam festival where people walk on fire, leads to the entrance of Mahamandapam. The Lion mount faces the goddess and Neeli and Sooli guarding the entrance. The Goddess, though the aggressive form of Kali, has a very peaceful look. Hearsay reports suggest that a Chakra has been installed for pacifying the Goddess. The Parivara Sakthi's dots the black polished granite Sanctum Sanctorum. The Urchava Sakthi is in the south eastern end of the sanctum sanctorum.

A great Shiva temple built entirely in Rajasthan marbles, a beautiful Vishnu temple and Meenakshi Sundareswarar temple within the Shiva temple needs to be visited for devotion to flare up in one's mind.

5 day Margazhi (December-January) car festival (walking on the fire pit) drawing a crowd exceeding 10 Lakh; Aadi Friday festival on all Fridays of the month during July-August; Fridays in the month of Thai (January-February) are the festivals celebrated in the temple. Also, all Tuesdays and Fridays attract a huge crowd of devotees. Special pujas are performed during Navarathri days in September-October, Karthikai in November-December, Pongal, Deepavali, Tamil and English new year days. Temple is always crowded on some festival.

Devotees walk on fire pit. Offer Sari to Amman. They also perform Laksharchana (chanting the name of the Goddess one lakh times), 1008 conch abishek, dress her with flour colored in green and sandal paste. They place the deity on a moving plank called Oonjal and sing Her praise. General abishek and pujas are also arranged by the devotees and feeding the visitors (Annadhanam). The affluent offer liberal donations, for temple maintenance and renovations.

The nearest airport is Coimbatore, 85 km away.

The nearest railways station is at Erode Railways Station.

Pariyur is very near to Gobichettipalayam at a distance of 3 km. Bus facility is conveniently available from here.