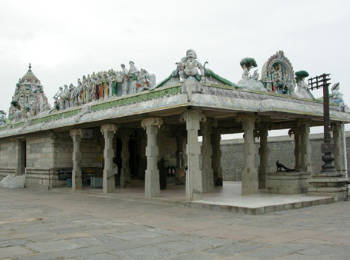 The temple is located on a hill facing east. It has a 5 tier Rajagopuram at the entrance. The steps are convenient and broad to reach the temple. The Deepa Sthamba is placed before the Rajagopuram. There is a shrine for Idumban, the head of the Muruga’s force. A temple for the anthill is located at foot hills on south east side. It is believed to be the tomb of Mayuragiri Siddha, and pujas are performed on new moon days. Devotees call this anthill (Puttru in Tamil) Subbarayar. There is a shrine for guardian deity Sukkumalayan under the Palai tree on the way to Mother Valli-Deivanai’s shrine. Those seeking child boon pray here.

Hills belong to Lord Muruga. Where there is a hill, there is Muruga. Naturally, He blesses His devotees from Oothukuli Kathithamalai hills in Erode district. This is a prayer centre where Saint Agasthya worshipped the Lord. The presiding deity, Lord Vettri Velayuthaswami graces here without his consorts Valli and Deivanai in a standing form.

After defeating and killing Surapadhma, Lord Muruga alone was here. Valli and Deivanai came to this hill and begged Lord Muruga to marry them. They were the daughters of Nambirajan and Indira respectively. As this happened before the wedding, separate shrines are allocated to them. Lord Muruga carries with Him three powers – Valli the Itcha Shakti, Deivanai the Gnana Shakti and the Vel (Muruga’s weapon) the Kriya Shakti, representing love, knowledge and action. These are merged in Lord Muruga. While the first two Shaktis are by His sides, the third, the Vel is placed on His chest. Lord Muruga Himself is an embodiment of wisdom.

Sage Agasthya went on a pilgrimage to all shrines of Lord Muruga. He was accompanied by Maharshi Narada and the Devas. There was no water in this place to prepare the nivedhana for the puja. Sage Agasthya was sad. He prayed to Lord for water. Lord promptly appeared, punched His Vel and created spring flowing abundant water. The sage was happy. He completed the puja and quenched his thirst too. As the spring came from a pit, the place was named Oothukuli –Oothu means spring and pit means Kuli in Tamil. A temple was erected here for Lord Muruga.

Thai Poosam in January-February, Vaikasi Visakam in May-June and Skanda Sashti in October-November are the festivals celebrated in the temple.

Those facing obstacles in Marriage and couples separated in life, pray here

The nearest airport is Coimbatore Airport.

Kathithamalai Murugan temple can be reached by bus from Erode running through Oothukuli (15 km).